What Castro or Chavez Can Look Forward To

...they can look forward to the common man, the noble native, and anyone with the right length of rope to genuinely liberate themselves from cretins of that sort.

Hey, thought that Tony Blair is the only sort of person that can be dragged into an International Court type of political boondoggle?!?! How about a real life mass murderer? 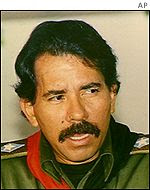 «The "Red Christmas" complaint refers to supposed crimes committed during the Sandinista army operation to remove some 8,500 Indians from their communities on the banks of the Coco River, along the border with Honduras, and relocate them in five camps to prevent them from giving logistical support to the Contra insurgents.Indigenous groups have complained that hundreds of their people died during the operation. The complaint also includes current Sandinista lawmaker and former Interior Minister Tomas Borge, former DGSE secret police chief Lenin Cerna and Nicaragua's current human rights prosecutor, Omar Cabezas.»

Imagine that, they even use the word “indigenous peoples” left and right too, and they’re still mass murderers, and still have friends in Hollywood. Take a moment and look at who the Indigenous “Peoples” were supporting – the ones opposed to people taking away personal liberties under the pretext of a pretend humane ideology.

Hat-tip to Ezra Levant at The Shotgun and PlubiusPundit
Posted by Joe at 17:24