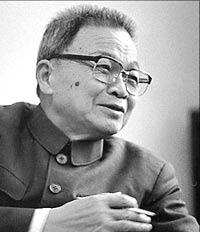 An obituary in the Times Online(UK) reflects on the life and times of Professor Xue Muqiao, the man whose theories are responsible for removing what may be the greatest number of people out of poverty in the last 25 years. He did this by nibbling away at the last century's great starvation-maker: communism.

«In 1967 he was criticised, dismissed from most of his posts and sent to the countryside to relearn revolution. He did not resume work as an economist until the eve of Mao’s death in 1976.

Subsequent revisions of Xue’s book, a kind of textbook for the new State Commission for the Restructuring of the Economic System, called for obedience to the “objective laws of economic development”. He championed the “socialist commodity economy”, and criticised “leftist errors” of blindly worshipping public ownership. There should be a mixed economy with competition between state, collective and privately owned sectors. This state of affairs would endure for decades since the party had decided, contrary to what had been believed under Mao, that China was only at the “initial stage of socialism”.»