"Lebanese Red" to return the the UK for free heart operation 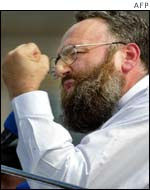 The the Daily Mail Online reports on Omar Bakri Mohammed's parasitic hate-hate relationship with the UK.

«Hate preacher Omar Bakri Mohammed may undergo heart surgery in an NHS hospital if he returns to the UK.
Bakri, who says he has a congenital heart problem, has already missed several appointments or had them postponed, friends said, but another one is likely to be scheduled before the end of the year.
Earlier this year the father-of-seven, who uses a walking stick, took delivery of a £30,000 Ford Galaxy people carrier paid for under the Motability scheme.

He is estimated to have received several hundred thousand pounds in benefits during his two decades in the UK.
Bakri, who had his mobile phone turned off today, sparked outrage last week by saying he would not inform police if he knew Muslim extremists were planning a bomb attack in Britain.»

Good idea. Let the taxpayers paying for your heart treatment croak. He's a wizard in the art of self preservation. It seems he has enough faith in Britain and the British to go under sedation with a dude holding a scalpel above him as well.

You know the free charity clinics in Lebanon come highly recommended.
Posted by Joe at 18:17