How a Trusted Ally Betrayed Washington

«Perhaps the most enduring tenet of American history, implanted early in our school years, is the belief that France was our strongest ally and our closest friend during the American Revolution against the English.

Mr. Unger's book makes clear that none of them wanted to lose the war or their own territories that were put at stake to wage the conflict. All three wanted to come out richer than they came in. The British wanted to reinforce their hold on Canada, and regain whatever they had lost in earlier conflict with France. The British also wanted to reinforce their hold on the colonies, and on America as a whole. The French were not there, he says, to help win independence for the new United States, but to "recapture the United States."»

« The New World was seen by the nations of Europe, particularly France, England and Spain, but also smaller nations such as The Netherlands and Sweden, as huge hunks of new land for the taking, with new waterways, new resources and ample room for settlers and new trading companies.»

Like their view of Africa and the Near East, some things never seem to change. The stakes in their effort now might be Nestlé, Unitlever, or BP Shell, but the subtext isn’t any different. It gets even more puzzling: 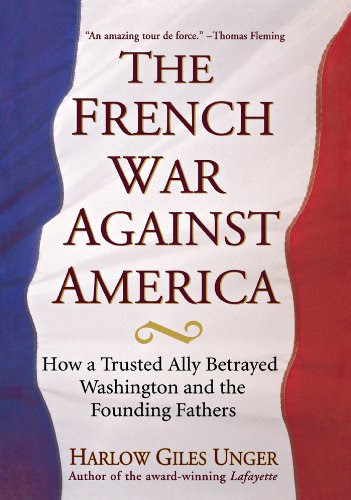 «By the summer of 1775 there were spies everywhere -- British spies, French spies and others -- all funneling information to the governments they served, including some stolen from Washington's own command, such as data on his need for arms and munitions. French spies reportedly were putting cash into the hands of various members of the American Congress. (And it was French money.)

The French spymaster in Paris, named Vergennes, informed his top agent in America, Gen. Rochambeau, to permit no French troops to separate from others, and to be certain they were serving under French generals. Mr. Unger cites Vergennes as the one who liked to plot Gen. Washington being shot from a horse, so that Rochambeau could take his place and control the American army.

It is of interest that John Adams (later the second president) spent much time in Europe during the Revolutionary War and warned repeatedly that the French should not be trusted.»