Ruling victim's committee of the Godesses 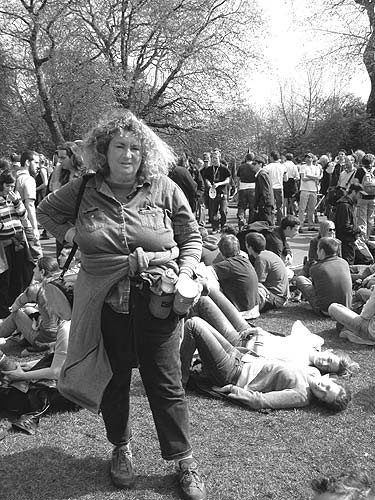 Faith in the “Goddess within” = victimhood? How confused can you get?

Is this gullible cretin kidding? She seems to find an opening among the middle-minded suburbanite-in-white-pants search for "self-realization" in Jew hating. In what, you ask?

I asked it once, I'll ask it again... Why are the women who call themselves "godesses" usually atheists, and why can't the ones who call themselves "divas" actually sing? Don't you notice that these are the least accomplished people you ever met, "talking up" their empty minds and distinct lack of awareness about the world?

Of all places, in a Mother's Day article in the leafy town of Ithaca, in upstate New York. But then again, the far left has it in for motherhood, anyway.

«Readers of the Ithaca Journal in upstate New York opened their paper this weekend expecting another flowery article marking Mother's Day. Instead, they got an anti-Israel diatribe that illustrates just how deeply this rhetoric has seeped into the fabric of some communities and local media.

In an opinion column, Sandy Wold urges fellow mothers to follow her introspective, 'enlightened' path to self-realization and parenting. Wold is particularly concerned with the problem of 'victimhood', offering up this example:

Most people get stuck in the victim role, however. On the global scale, for example, Zionist Jews in Israel [Ed.: disseble THAT!] have occupied Palestinian land in the name of God and victimhood. If anyone criticizes Israel for their terrorist attacks and slaughter of the Palestinians, they are mmediately labeled "anti-Semitic" and guilt-inflicted for the Holocaust without any regard for Palestinian suffering. In response, the United States and United Nations fall into a co-dependent behavior of acquiescence and collusion.

[Ed.: how is it that the people who know the least about the world, seem to personalize geopolitical and ethical matters into a state of either paralysis or a call for a new kind of pogrom?]

This demonization of Israel and offhand treatment of the Holocaust is all the more disturbing given the author's self-description from her website, Healing The Goddess:

The armor I used to carry in my body has melted away. I am more open, kind, loving, and patient than ever before... only now it is predominantly effortless and abundant.

Yet Wold's 'abundant love' ends very abruptly at Israel, which receives the brunt of her not-so-warm Mother's Day greeting.

One of the most popular gurus of this ostensibly peace-loving theology is a woman who goes by the name 'Starhawk'. Starhawk…
Starhawk is also a spiritual mentor for the International Solidarity Movement (ISM) of Rachel Corrie fame, a 'peace organization' whose primary activities have included protecting Palestinian terrorists from the IDF.»