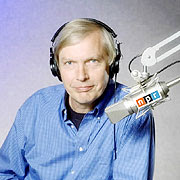 The power of leftist media. From the same sort that thought NPR's Bob Edwards wasn't PC enough. Maybe his love of Basketball made him seem too male for their taste.

Human Rights Watch appears to be the source Newsweek's “Koran in the Latrine” story, which they are tight-lipped about. It appears that they have little proof at all to go on, but cited the source anyway. A riot results, people die, they get to convince a few more gullible people that the US is engaged in a religious war. There goes their show of force. Useful, no?

But that’s not the real story, not to the Beeb, the Guardian, and their fellow travelers.

Look over this piece. No source of the report out of Gitmo is given. Only the assumption that the riot was founded, a focus on 4 dead rioter in Kabul, and the slow transformation from “desecration” to “abuse”. In other words, this is a roundabout way of implying torture, in only the way the United States can be nailed for it. In other words, only the United States can actually be nailed.

This appears to be going the same way as the 4 British detainees who were released, and accused the U.S. military of torturing them. No follow up. No proof. And not heard from since. Crickets. It's safe to assume that their argument was spent, there wasn't that much to it, and that they are no longer useful to the press.