The most distressing sight of my life

If you were asked to think of some of the most distressing things that you have ever witnessed, what would you say?

Should that question be asked to some of the human rights activists whose loud voices we hear regularly, or to some mainstream media members spending the day in their offices and home towns, many would be tempted to mention not something personal they had witnessed in person, but an international event such as the Iraq war, Guantánamo, and Abu Ghraib.

Not so the BBC's retiring Stephen Sackur.

As he hangs up the microphone of BBC foreign correspondent, Sackur brings with him a host of powerful memories, one of the very strongest coming from Iraq. 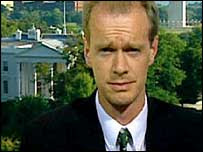 A country especially dear to me, as my wife's homeland. It was there I saw the most distressing sight of my life. Men and women clawing at the earth, uncovering the first of the mass graves discovered after the fall of Saddam Hussein.


Thousands of stinking corpses came out of the ground that day. I saw infants with bullet holes blown through their skulls. I was the only reporter there. I sensed in that Iraqi field that I was a necessary witness, in the right place at the right time.

Update: JazzBow reminds us that NP treated a similar story before…