Contrasting "the American dream" with "the European daydream"

The received wisdom about economic life in the Nordic countries is easily summed up: people here are incomparably affluent, with all their needs met by an efficient welfare state. They believe it themselves. Yet the reality — as [Oslo-dwelling American Bruce Bawer can attest (in the New York Times)], and as some recent studies confirm — is not quite what it appears.


Even as the Scandinavian establishment peddles this dubious line, it serves up a picture of the United States as a nation divided, inequitably, among robber barons and wage slaves, not to mention armies of the homeless and unemployed. It does this to keep people believing that their social welfare system, financed by lofty income taxes, provides far more in the way of economic protections and amenities than the American system. 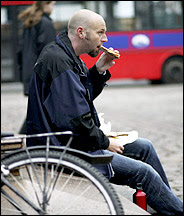 …After I moved here six years ago, I quickly noticed that Norwegians live more frugally than Americans do. They hang on to old appliances and furniture that we would throw out. And they drive around in wrecks.


Be sure to a study by a Swedish research organization, Timbro, which compared the gross domestic products of the 15 European Union members (before the 2004 expansion) with those of the 50 American states and the District of Columbia. (Norway, not being a member of the union, was not included.)


After adjusting the figures for the different purchasing powers of the dollar and euro, the only European country whose economic output per person was greater than the United States average was the tiny tax haven of Luxembourg, which ranked third, just behind Delaware and slightly ahead of Connecticut.


The next European country on the list was Ireland, down at 41st place out of 66; Sweden was 14th from the bottom (after Alabama), followed by Oklahoma, and then Britain, France, Finland, Germany and Italy. The bottom three spots on the list went to Spain, Portugal and Greece.


Alternatively, the study found, if the E.U. was treated as a single American state, it would rank fifth from the bottom, topping only Arkansas, Montana, West Virginia and Mississippi. In short, while Scandinavians are constantly told how much better they have it than Americans, Timbro's statistics suggest otherwise. So did a paper by a Swedish economics writer, Johan Norberg [who contrasted "the American dream" with "the European daydream"].


Obviously, this is one misconception that won't be put to rest by a measly think-tank study or two.