Belgian spooks boozing on the job 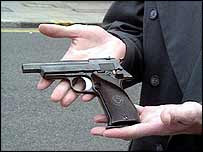 «[SMH] Brussels: The battered reputation of Belgium's security forces has suffered a new blow with the revelation that its internal spy service has disarmed almost all its field agents after one drunkenly tried to shoot a colleague in the head.
The civilian agents of the Surete de l'Etat, the equivalent of ASIO [the Australian Intelligance Agency], are already among the most powerless intelligence operatives in the Western world, with no right even to tap telephones.
Now they have had their pistols confiscated on the orders of their general administrator, Koen Dassen, a Belgian newspaper reported on Monday. A working group has been established to work out who is armed and why, after Mr Dassen realised controls were "worse than approximate".
Saar Vanderplaetsen, a spokeswoman for the Minister for Justice, Laurette Onkelinx, confirmed that Surete agents had had to hand in their weapons, pending new regulations.
She was unable to confirm reports that officers had gone on a virtual work-to-rule since being disarmed, including avoidance of risky missions.»

Let’s hope they don’t actually have to DO anything. Besides, what could they do? The do-gooders have turned them into drunken louts anyway!

- h/t to our resident remote sensing specialist, Steve
Posted by Joe at 17:15