Training a Generation of Anti-Americans: France's School Books Paint America as a Predatory and Savage Hyper-Power

I recently attended a seminar in which Nicole Bacharan discussed the subject of her book, Should We Be Scared of America?

Her answer was, basically, no, although she couldn't help adding that we (and the Americans) would be better off without Bush, his team, and their policies. Question-and-answer time was filled by Frenchmen (and -women) asking, How can you say that we should not feel scared of America, when there is Bush's adventurism? When there is John Bolton and Paul Wolfowitz? When poor Mexican immigrants are forced to wave the flag, the poor devils? (Sigh…)


Most interesting, perhaps, was the fit that Nicole Bacharan had while looking through her daughter's history book. Where America was discussed, not once would the word "capitalism" be used without a word such as "savage" being used along with it. But where China was discussed, she saw lengthy paragraphs on Mao's economic policies with the phrase "five-year plan" followed by the words "(six million dead)" in parentheses!

Little wonder that Christine Champion and Vladimir Volkoff have written Disinformation Through the Education Ministry. Little wonder that a history teacher and a journalist have joined forces to write a book about anti-Americanism in France's teaching manuals. In Students Under the Influence (i.e., SWI or Studying While Intoxicated), Barbara Lefebvre and Ève Bonnivard ask whether French schools aren't in the process of training a generation of anti-Americans? 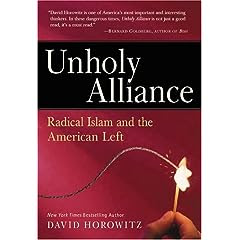 The United States is presented as a predatory hyperpower and the coverage of September 11 "push the student to accept verbatim the political claims of Bin Laden, who depicts himself as a liberator of today's damned of the Earth" (the expression used for the workers in the Communist Internationale song). One writer, it is said, accepts the terrorists' propaganda wholesale, believing that "America was fairly punished for having starved the planet."


Needless to say, Le Monde's Martine Laronche manages to relativise this, but in Unholy Alliance, David Horowitz already established quite conclusively that today's far Left has made common cause with new Islamist fanatics.

Update: a non-profit association trying to
fight back, SOS Éducation, faces a lawsuit…