When will René Lévesque show up and shout «Vive la France Libre?» 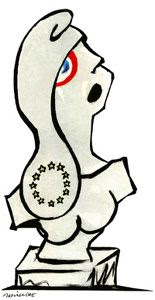 Quebec rejected sovereignty when the public realized that it would hit their pocketbooks. Many corners ofFrance is favouring rejection the EU looks like a similar reaction, which too ran along the lines as it does today in France. It also fits a larger
pattern of getting in on transnationalist efforts, and use the threat of sabotage to exert influence beyond the nation’s scale.

Ultimately both Lévesque and Trudeau opposed breakup just as Chirac prefers EU accession, except that their issues were much larger than that of economy, but went to philosophy and culture tempered by the viability of the outcome.
To be sure this is in the hands of the French public, which is an off position for a European state to be in. It is down to the vote – there aren’t many “re-vote until we hear oui” tactics that will work.

The point is that each of these movements is driven by enlightened self interest and open discussion. Something they are loathe to engage now. Any political movement that tries to put itself above debate, and attempts to banish discussion of criticism is totalitarian in nature and doomed – but generally only after it harms people.