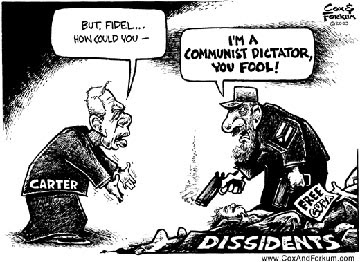 Do not provoke Fidel, says Louis Michel, the EU "development commissioner".
From the Telegraph (UK):

«Mr Michel's visit was intended to herald a fresh start for friendly relations between Cuba and Europe, following the EU's recent decision - under heavy pressure from the socialist government in Spain - to suspend diplomatic sanctions imposed on Havana in 2003.

Mr Michel, a Belgian, said he was encouraged by signs of change in Cuba and declined to offer support for a planned dissident "congress", uniting 300 Cuban rights groups.»

Samizdata’s Brian Micklethwait: «The EU would do better to concentrate on developing itself.»