Grandstanding: How Europeans Use the UN and Other International Bodies to Boost Their Own Self-Image While Lambasting Uncle Sam


When lambasting Bush and America for arrogance, unilateralism, insensitivity to others, and/or opposing "the international community's desire for a fair and impartial legal system", there are several things that America's detractors usually (and conveniently) downplay and/or leave out.

Foremost among the numerous examples, anything negative touching the United Nations — such as the hushed rape of Timor (thanks to Gregory) or the makeup of the UN Human Rights Commission (thanks to Joe, more below) — is either ignored or receives only the most basic treatment necessary (read first para) for the media outlet to be able to say "Oh, but of course we covered that too; no doubts about it, we displayed the objectivity expected of us!"


With regards to the International Criminal Court, John Rosenthal points out that France's position "will be a matter of pure grandstanding". The resolution recently presented by Paris was

designed precisely to embarrass the United States and make it appear as somehow “soft” on war crimes — even though, in fact, the US government has taken a more severe line on the events in Darfur than both the leading European governments and the UN bureaucracy.

What the French will not tell you, Rosenthal adds, is that

France at one and the same time ratified the statute of the court and declared that it did not recognize its jurisdiction over war crimes — except when alleged to have been committed by non-French citizens or on non-French territories.

It’s little known that France was in fact once upon a time a major opponent of the ICC and even now refuses to accept the jurisdiction of the court over charges of war crimes directed against its own military.

The reason that that is a little-known fact, of course, is that it is the type of fact that does not contribute to French grandeur, and so it is one that French politicians, journalists, and citizens do not make a big fuss about.


Another "detail" that none of the ICC's champions mentions:

Although its name gives the impression that it is an “international institution” in the same sense as, say, the UN … in fact the ICC represents the international equivalent of a “private” court. It is “owned”, so to say, by just those countries that are its members. Not only does the ICC statute come nowhere near to meeting the due process standards of American law, but its mode of financing is such that its partiality is practically guaranteed.

With regards to the absence (to say the least) of "the due process standards of American law", Edwin J Feulner specifies that

Americans would hardly recognize the ICC as a court. For example, defendants may face double jeopardy, hearsay evidence, absentee trials and other things not permitted in American courts. Should we abandon these protections just because they are not part of international law?

And to give an example that gives the lie to the claim of ICC impartiality, I have already shown how its spirit is perfectly symbolized by the fact that its champions (official and otherwise) have made a big fuss of going after General Pinochet (a dictator out of power for the past 15 years) while doing nothing against Fidel Castro (a dictator in power, with seven times as many victims to his name). 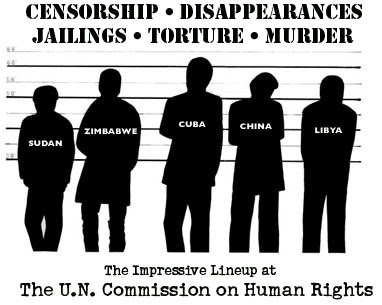 This is where Richard Bernstein's article about the United Nations Human Rights Commission comes in.

…it has been business as usual at the commission, uneven and inconsistent. This year, as in almost all years, there will be probably five resolutions criticizing a single country, Israel. There will most likely also be some action on North Korea and Sudan and perhaps a resolution on Cuba, too, though this year many diplomats predict that Cuba has the votes from sympathetic members in Africa and Latin America to see it voted down. But no Arab dictatorship besides Sudan will be in the dock, nor will Iran, or Congo, or Russia, or Togo, or, in fact, many of the others among the 50 or 60 of the world's remaining dictatorships.


The underlying problem? No less an authority than Kofi Annan, the UN secretary general, determined in his recent report on UN reforms that the commission had fallen under the influence of dictatorships, who seek membership precisely to deflect attention from themselves.

"The inmates are very close to being in charge of the asylum," Keven Moley, the U.S. ambassador to the UN in Geneva, said, agreeing with Annan's assessment.


Many developing countries, by contrast, see the commission as a sort of postcolonial Western tool of domination, judging the "Southern" countries but not the Northern ones. The Europeans seem to lean to a middle position in this matter, being more likely to play ball with the various geographic groups whose tendency is to protect their fellow members: the African Union in the case of Zimbabwe, for example. This leads members of the Bush administration to see the Europeans at the Human Rights Commission in the same way they see the Europeans in general: as too soft, too accommodating, allergic to bold action.


"We are ready to take chances for freedom," Moley said. "They'll take no risk that leads to instability."

You will note that, although he leads his article with three incontrovertible examples, the New York Times' Bernstein could not even bring himself to state the obvious, but (besides using the limp "uneven and inconsistent") had to format its title as a question (Are the foxes guarding human rights at UN?). This seems to be the piece's conclusion:

…it does seem fair to say that there is a real Euro-American cultural divide here. The Europeans understand perfectly well the invasion of dictatorships into the commission, but they have faith in the necessity of such international organizations to do good, and they want to be patient, hoping to make them work. The Americans are convinced that in the real world of self-protective and cynical dictatorships, the UN often tends toward a kind of tyranny of the majority, and the American goal is to fight back, rather than to go along in the hope that things will change.

But in typical MSM fashion, Bernstein accepts other countries' assertions uncritically, mindlessly agreeing that whole populations share one point of view, and not reflecting to think that when "other countries" are mentioned, it is actually the spokesmen of governments with self-serving motivations and with largely acquiescent media outlets, régimes who often have a large say (to say the least) in determining the information that their citizens receive and that they are instrumental in shaping.


This applies both with regards to European members — those who claim that a "quieter approach often works" (it is true that Saddam Hussein, for one, said as much) — and with regards to the aforementioned authoritarians — the same who would have us (and their own populations) believe that "developing countries … see the commission as a sort of postcolonial Western tool of domination, judging the 'Southern' countries but not the Northern ones."

In this perspective, Bernstein lets Germany's commissioner for human rights policy and humanitarian aid reply to the Americans — he lets him have the final say, in effect — by invoking the… ICC, by castigating the Americans for not countenancing that court, by nonchalently implying that it is all the Americans' fault, and by thereby joining the chorus of self-serving voices putting the blame for the paralysis on America (here, Washington's "blackmail of shame"). Bernstein does not intervene to protest that the ICC is not the impartial body that Europeans like Tom Königs claim it is.


In other words, that, too, was "a matter of pure grand-standing", designed (once again) "to embarrass the United States", and that by people, governments, and institutions loudly broadcasting their self-serving points of view with their attendant ugly prejudices of Uncle Sam, showing little regard for truly bringing an end, say, to the blood-letting in Darfur. And this is the type of policies many people, in the U.S. and abroad, would have Washington kowtow to and follow.