Michael Jordan and the American Way of Doing Things

Today is the birthday of Michael Jordan (1963- ), the American Basketball Player who said (the two top quotes seem especially destined for our European brethren and their governments): 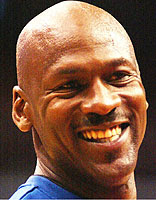 
If you accept the expectations of others, especially negative ones, then you never will change the outcome.


I never thought a role model should be negative.


I can accept failure, but I can't accept not trying.


I play to win, whether during practice or a real game. And I will not let anything get in the way of me and my competitive enthusiasm to win.


I realize that I'm black, but I like to be viewed as a person, and this is everybody's wish.


I've always believed that if you put in the work, the results will come. I don't do things half-heartedly. Because I know if I do, then I can expect half-hearted results.


I've missed more than 9000 shots in my career. I've lost almost 300 games. 26 times, I've been trusted to take the game winning shot and missed. I've failed over and over and over again in my life. And that is why I succeed.


If you're trying to achieve, there will be roadblocks. I've had them; everybody has had them. But obstacles don't have to stop you. If you run into a wall, don't turn around and give up. Figure out how to climb it, go through it, or work around it.