Pablo asks our Spanish-speakers to check out his weblog, El Ibero Americano.


While we're on the subject (so to speak), it is interesting the way one discovers new truths in the damndest places. At the bottom of a page filled with articles on the green light for Pinochet's judgment, Paulo A. Paranagua provides us with a piece on John Dinges' investigation of the Condor plan.


Now, the hair of many people will rise on their heads if they believed that anyone — a blogger, a journalist, an author, anybody — were to even think of starting to defend what they call an operation of the basest, and darkest, of kinds. 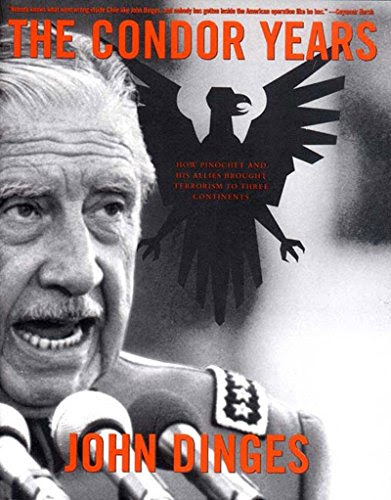 And that was certainly neither the intention of Le Monde or Dinges. Still, neither seemed to be able to avoid the fact that

The [November 1975-created] 'Condor' plan was supposed to be an answer to the Revolutionary Cooordination Junta (RCJ), formed in August 1973 by the extreme leftist organizations of four countries: the People's Revolutionary Army (PRA, Argentina), the Movement of the Revolutionary Left (MRL, Chile), the Tupamaros (Uruguay), and the Army of National Liberation (ANL, Bolivia).


"The RCJ became a sort of revolutionary patron," writes John Dinges, "a sort of Rockefeller Foundation of the Marxist left", which managed and handed out money from kidnappings.


… "The military governments took the RCJ so seriously", explains John Dinges, "that they made it the primary target of the 'Condor' operation" by mixing non-violent opponents with guerilla fighters.

The author of The Condor Years goes on to say that

"The actual Condor 'operation' in and of itself was responsible for only a relatively small part of the line of assassinations and violence, but [and the following part constitutes the Monde article's title] the most serious and the cleanest break with a state of law".

Remember, one essential aspect of anti-Americanization, specifically, or, more generally speaking, demonization of an adversary, is to pretend that a certain policy was entirely gratuitious and without any provocation or other basis and that, in any event, the alleged opponents were basically harmless ideologues. Careful examination of the period often proves otherwise…

As usual, a striking correlation between freedom and prosperity emerges. The data all point to incompetent or tyrannical government as the source of the world's economic ills. In our view, it's no coincidence that the places with the most tyranny and political turmoil are also the most troubled economically. …


That [data] should help put to rest the contention that liberalization means stagnation, as many have claimed about Latin America. In that region, mostly stagnant economic growth has mirrored mostly stagnant liberalization efforts — another non-coincidence, in our view. The country with the most free economy in the region, Chile, enjoyed a high growth rate, while the one that consigned freedom to the gulag, Cuba, and another heading in the wrong direction, Venezuela, both ended up with abysmal growth rates. In that regard, Cuba outdid itself. It was the only country in the world to place simultaneously among the 10 most repressed economies and the top 10 repression-heighteners simultaneously.


The troubling cases of African and Middle Eastern countries only prove the point further by showing how extensively repression and poverty go hand in hand. Six of the 10 most unfree economies and six of the 10 most-worsened countries are located in those regions. Not surprisingly, when plotted along x- and y-axes of increasing per capita GDP and increasing freedom, these countries are mostly clustered together down near the bottom of both scales, with some prominent Middle Eastern oil kingdoms the sole exceptions. Besides those, in these least democratic of regions, tyrannical governments or incompetent ones repress their peoples and economies, and the result is human misery and warfare on epic scales. As one indication, the report's "least free" list reads like some expanded "Axis of Evil" rundown, containing Iran, Cuba, Zimbabwe, Libya, Burma and North Korea, among others.


We hope readers of the economic freedom index take the latter facts to heart, since it's clear to us from the numbers that good things like economic and political freedoms go together. Repressive governments worldwide should take note.