What Caused Secession and Ergo the Civil War? Was It Slavery and/or States' Rights? Or Wasn't It Rather Something Else — the Election of a Ghastly Republican to the White House?

In the uproar over President Donald Trump's comments about Andrew Jackson and the Civil War, we are told that the science is settled, so to speak: slavery caused the conflict.

Except that others, especially in the South, retort that the War Between the States was caused by states' rights.

I wonder about both explanations…

Take a moment. Take a moment and think of the Democrats' revulsion over, as well as the mainstream media's depiction of, such leaders as Donald Trump, Sarah Palin, George W Bush, Ronald Reagan, etc, etc, etc…

Think about how every four years — and every month in-between, really — all Republicans (Republican voters, Republican "haters", Republican candidates — successful or otherwise — etc) are depicted as Hitler (in other words, as someone akin to Lucifer), fascists, Nazis, monstrous, racist (or, more generally, satanic), reptiles, engaging in hate speech, etc, etc, etc…

Two years ago, during the Confederate Battle Flag scandal (sic), I wrote an extensive post on antebellum history (divided into 5 parts), entitled:


Wondering Why Slavery Persisted for Almost 75 Years After the Founding of the USA? According to Lincoln, the Democrat Party's "Principled" Opposition to "Hate Speech"

The conclusion of the post's fifth and final part is as follows:


debate over the causes of the Civil War veer between the South's defense of slavery and the South's (alleged) fight for state rights.

How about a much simpler solution?

Isn't the truth looking at us from the center of the room?

Isn't the main reason that, then as now, Democrats (ever "fighting for the American people") did not want to be ruled by such low-life scum (reptiles, outlaws, pirates, murderers, terrorists, haters, etc) as Republicans, as abolitionists, as Tea Partiers?

There you have it.

This post could end here, at this point, but, for those of you interested in details, I recommend reading the entire post, or at least, the entire last part, which is reproduced below:

FYI, the four first parts of the post are entitled:
1) The Presence of Slavery at the Founding of the USA Is Always Taken by Democrats—Either Favorably or Unfavorably—as the Founding Fathers' Intended Support For, If Not Creation of, the Institution
2) Considered Uncouth and Extremist, Like "Hate Speech" Today, Criticism of Slavery Was to Be Avoided and the Boorish Critics Were to Be Gagged If and When Possible
3) American Slavery and Abolitionism in the Context of World History
4) The Arguments Southerners Used to Defend Slavery in the 19th Century Sound Strangely Similar to Those of Leftist Heroes the World Over in the 20th and 21st Centuries.


5) Republicans in the 19th Century Were As Castigated, As Ridiculed, and As Demonized As Today's GOP Members Are—If Not More

You can hardly find a description of Garland's Jihad Watch Muhammad Art Exhibit and Cartoon Contest, pro or con, without the writer (again, pro or con) feeling the necessity to have no choice but vilify Pamela Geller in the harshest of terms, as a human being of the most horrid of sorts (from shrill and obnoxious to possibly outright racist).

Guess what, Democrats! That is exactly (as we have seen) how your party treated abolitionists in the 19th century. As the lowest, and as the vilest, of human beings.

It is often said that Abraham Lincoln was a racist (the—few—times he used the N word, he actually appears to have been quoting Stephen Douglas's words back to him) — or that he had no choice, willingly or otherwise, but to appeal to the common racism of the American people. (Thus the modern-day leftist has history conveniently written down, once again, in a way in which America's forefathers are all demonized, as bigots, while modern leftists like he or she appear wise and humanistic.)


When you are dealing with the mainstream media, it is always difficult to tell if you are dealing with willful ignorance or just plain old ignorance-ignorance. There are plenty of moronic savants in the national media who have cracked the “hot take” code to please their left-wing masters but have no fundamental grasp of history, or much of anything much of else.


…In the liberal telling of America's story, there are only two perpetrators of official misdeeds: conservatives and "America" writ large. Progressives, or modern liberals, are never bigots or tyrants, but conservatives often are. For example, one will virtually never hear that the Palmer Raids, Prohibition, or American eugenics were thoroughly progressive phenomena. These are sins America itself must atone for. Meanwhile, real or alleged "conservative" misdeeds — say, McCarthyism — are always the exclusive fault of conservatives and a sign of the policies they would repeat if given power.

What Lincoln had to do, rather, was less "appeal to the common racism" per se of the average American per se than to distance himself from those demonized abolitionists.

In the very same manner that Republicans, today, are constantly being asked, requested, to differentiate themselves from "far-right" "extremists" of such groups as the Tea Party.

That's right: the abolitionists of the 19th century were as demonized and ridiculed (today's castigators of slavery will be happy to know) as the members of the Tea Party are today.

And how about members of the nascent Republican Party? How were they treated in the 1850s? Can you imagine?

Well, only five years ago, James Carville referred to (modern-day) Republicans as "reptiles".

And 150 years ago, when an Illinois Republican felt the necessity to address himself to Southerners and Democrats (during his Cooper Union speech in 1860), guess which term Abe Lincoln reached for:


…when you speak of us Republicans, you do so only to denounce us as reptiles [!], or, at the best, as no better than outlaws. You will grant a hearing to pirates or murderers, but nothing like it to [Republicans]. In all your contentions with one another, each of you deems an unconditional condemnation of [Republicanism] as the first thing to be attended to. Indeed, such condemnation of us seems to be an indispensable prerequisite — license, so to speak — among you to be admitted or permitted to speak at all. Now, can you, or not, be prevailed upon to pause and to consider whether this is quite just to us, or even to yourselves? Bring forward your charges and specifications, and then be patient long enough to hear us deny or justify.

"Reptiles, outlaws, pirates, murderers"… How often have Republicans been called terrorists in the past seven years?  (And in the years, in the decades, before that?)

So maybe we should take with a pinch of salt all the alleged decrees that the Democratic and Republican parties have switched positions between them and how, today, Lincoln would "obviously" be a Democrat.

You might be tempted to dismiss such (self-serving) musings — along with comparisons of the likes of Barack Obama to such illustrious predecessors as Abraham Lincoln and Ronald Reagan — as not the fruit of intellectual investigation, analysis, and arguments but—again—as part of its incessant litany of self-congratulation.

Indeed, debate over the causes of the Civil War veer between the South's defense of slavery and the South's (alleged) fight for state rights.

How about a much simpler solution?

Isn't the truth looking at us from the center of the room?

Isn't the main reason that, then as now, Democrats (ever "fighting for the American people") did not want to be ruled by such low-life scum (reptiles, outlaws, pirates, murderers, terrorists, haters, etc) as Republicans, as abolitionists, as Tea Partiers?

From my and Dan Greenberg's upcoming graphic novel on The Life & Times of Abraham Lincoln: 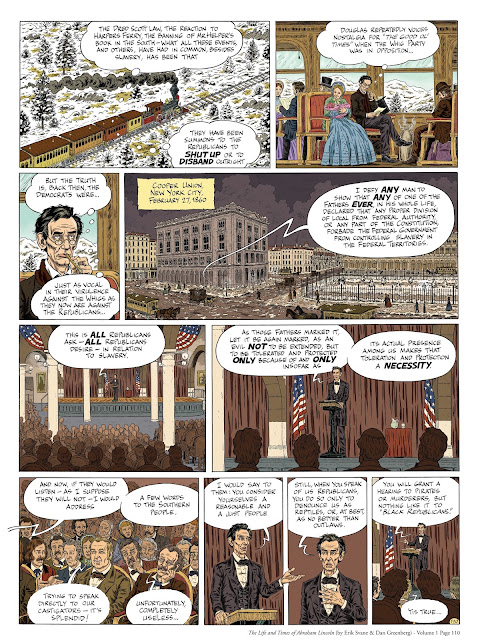 Related: How Come So Much of What Honest Abe Spoke of 150 Years Ago Seems Relevant Today?

And: How to Prevent America from Becoming a Totalitarian State
Posted by Erik at 11:33

As I recall, Harry Truman compared Thomas Dewey to Adolf Hitler and the only reason earlier Democratic nominees had not referred to Republican candidates thusly was that Hitler hadn't been around sooner. I'm confident Lincoln would have been compared to Hitler had Hitler been born a century earlier.