Mitt Hitler and Double Standards: Godwin's Law Applies to Thee, But Not to Me

a post with a poster of Mitt-Romney-as-Adolf-Hitler that's popped up in California (merci à Carine).

This is as good an opportunity as any to bring up Godwin's Law: I cannot be sure of Mike Godwin's original intentions, but certainly, in the way that Godwin's Rule of Nazi Analogies is invoked and used, it is a terrible thing that makes no sense and that in no way serves intelligent discourse — why in the course of a (reasonably intelligent) conversation should one not be "allowed" to mention Adolf Hitler — or Stalin — or Che Guevara — or Abraham Lincoln — or Dan Quayle — or Mickey Mouse?! (It makes no sense, that is, except to shut up the other person and make oneself look superior.) 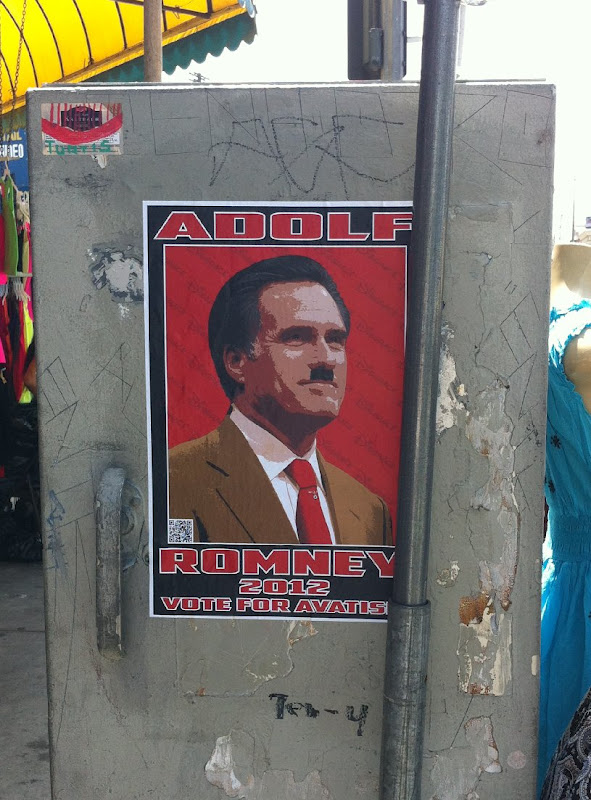 You're having an interesting argument, a good back'n'forth, and you are hearing all the arguments in favor of peace, of non-intervention; at one point you segue into the dangers of a peace candidate becoming, willingly or otherwise, another Chamberlain at Munich, and getting ready to cite arguments brought up at the time (1938), some of them extremely similar as those being brought up now, and the (sneering) leftist you are talking with lets out a shout: Time Out! Ha Ha! Godwin's rule! Conversation over! You nixed it!

Is this reasonable? Does it make sense?
(Is this not, rather, immature?)
Why should references to Nazis not be used?

Worse: it means that, instead of giving free rein to the conversation, and searching for new ideas and novel solutions (on both sides), at least one of the conversationalists is constantly monitoring the conversation, both the other person's (the other persons') and his own, for examples of Godwin's law (in addition to monitoring it for politically incorrect items like racism, sexism, phobias, gay jokes, and "hatred", generally, along with other things "beyond which we have moved" and that are "no longer acceptable").

Indeed, what you get is one party who is — eagerly — looking for traces (conscious or otherwise) of racism, sexism, Godwin's Law, and what have you in the other party's words, while the other party is — anxiously — worrying about traces of the same in his own words. In either case, a discussion that is hardly focused and hardly free and hardly honest.

You can just feel the first party's eagerness when suddenly you are interrupted and the pressure within the leftist is let out: "Hah! GOTCHA! You brought up the Nazis! You made a joke about women! You made a comment that proves you're a racist! Conversation over!"

Wonder why there is no more conversation in the Western world anymore? Really?! Godwin's Law is one additional part, small or large, in the manner in which free speech is being dismantled in the West.

There is a perfectly logical reason that Munich is brought up so often; it is simply the best known example, and by far, of avowed peace-lovers not getting the result they expected. (Au contraire!) Instead, if you wish, we could mention, say, the example of… well, no — there you go — off the top of my head, I cannot think of another example, certainly not one that is so good or so clear-cut or so famous to all.

In any case, Godwin's Rule of Nazi Analogies only applies to the right!

As is quite clear, leftists are giving free rein in evoking the Third Reich and the Führer, and that,

not in regards to reasonable arguments but regarding name-calling and insults: for the left (American or international), Reductio ad Hitlerum is par for the course — describing conservatives (or Americans generally) as fascists and (neo-)Nazis (in need of murder); invoking Greed-Über-Alles and the specter of genocide; comparing such things as global warming to the Holocaust and conservatives to Holocaust deniers; and painting square mustaches on the photos of George W Bush, Mitt Romney, etc…

However benevolent its original intention may have been, Godwin's Law as it is used turns out to be nothing but an umpteenth example of leftists' double standards…

Update: Danke schön to Instapundit for the Instalanche.

By the way, we would like to point out that No Pasarán contributed a Brett Kimberlin day post that Michelle Malkin does not seem to have noticed; if anyone can bring our entry to her attention, that would be much appreciated… And please notice that the post in question quotes Jonah Goldberg as saying: "That is how the liberal Gleichschaltung works; contrary voices are [among many other things] mocked"; with that in mind, please turn to update 2…

as poorly comprehended by bloggers, inhibits their free speech is laughable." In other words, they are deserving of mockery. That may be the case, but forgive me if I am wont to be skeptical. First of all, the point is not whether I understand, whether bloggers understand, whether conservatives understand Godwin's Law, it is how it is understood, or rather how it is used (or misused?), in the current culture.


@Polliwogette @nopasa The notion that Godwin's Law, as poorly comprehended by bloggers, inhibits their free speech is laughable.
— Mike Godwin (@sfmnemonic) May 28, 2012

Second, there are few arguments in his tweet (as if you hadn't noticed) and it seems like Godwin thinks it is beneath him to provide any. (Quick question: who does that remind you of?) I don't know if Mike Godwin is a leftist (or a leftist-leaning libertarian), but among people and ideas and other things, we are told, that are, or that have been, "laughable" in recent times (and that therefore deserve mockery), so many turn out to be conservative. Among them are:
• the "nutty" candidates for the Republican primary
• Sarah Palin
• George W Bush
• Ronald Reagan
• Lowering taxes
• Spending less money
• Resisting Obama's statist agenda
• Overthrowing Saddam Hussein, the Middle East's Adolf Hit— oops, sorry!
• the notion that you can bring up Munich and the Nazi era in a reasonably intelligent conversation

• (you get the idea…)
And so, it turns out, "Laughable" is equivalent to "sexist", to "racist", to "ridiculous" (such as bringing up the Nazis), to "outrageous". So beyond the pale that no further debate is necessary. And no need to present, and to defend (how convenient), well-constructed arguments.

If you will allow me to go a bit further on this topic: I am doing research for a graphic novel biography of Abraham Lincoln with Dan Greenberg. One of the things many people know was that in his early years Honest Abe was part of a debating club. In politics, Lincoln the Whig would debate (among others) Stephen Douglas the Democrat. What fewer people know is that when the debate was over, it turned out that… the debate was… not over; at that point the debate would start again, but with the debaters "switching sides" and this time having to argue for their opponent's policies — i.e., with Lincoln arguing for the Democrats and with Douglas arguing for the Whigs. (No "Ha ha conversation over.")

You have to wonder to what extent something similar could happen in today's day and age, with a leftist trying, just for the heck of it, to defend, rationally, the viewpoints of a Dubya or trying to see a good, objective side in the positions of a Sarah Palin.


The notion that Godwin's Law, as poorly comprehended by bloggers, inhibits their free speech is laughable

The wording suggests that the members of one tinny subset of society, (conservative) bloggers, are whining, and that because their speech, and their speech alone, is being inhibited (and aw, ain't that sad). Again, leftists do not deal with realities but twist language around so that their enemies, or adversaries, come out looking foolish (or "laughable"). Should it need to be repeated, it is quite clear that all people's free speech is being inhibited — with the exception of liberals, who always are allowed to enjoy the double standards that their self-serving rules create.

Update 4: To no one's surprise, Godwin's Law does not apply to Hollywood. Jonah Goldberg on the flood of "gratuitous political self-indulgence saturat[ing] the popular culture during the Bush years, in fare that had absolutely nothing to do with the policies of the White House:


In the two (awful) sequels to The Matrix, a science-fiction hit about humans being used as a fuel source by a world overtaken by machines, Bush is visually compared to Adolf Hitler.


A few months [after the 2008 election], the Post’s E.J. Dionne pretended to be shocked, Claude Rains in Casablanca style, that some were now calling President Obama a socialist who believes in nationalization, or heck, even a National Socialist. “Media Amnesiacs Suddenly Appalled at Hitler Comparisons” Lachlan Markay of NewsBusters wrote in November of 2009, after everyone from MoveOn.org to Al Gore to John Glenn spent the last eight years comparing President Bush and the GOP to Hitler and the Nazis:


A liberal Washington Post columnist laments today of the loss of civility in the public discourse. Strange that he is suddenly outraged that Americans would dare call Obama a socialist or a fascist, given that Bush-Hitler comparisons were widespread during the previous administration.

or communist comparing him to Hitler (incidentally, many of these signs were actually created by supporters of uber-leftist Lyndon LaRouche, as reported by Seton Motley here and here). These pundits had no such admonitions for signs at anti-war rallies during the Bush administration comparing him to Hitler and the Devil, and calling the president a fascist.

So the Post’s E.J. Dionne’s complaints about the loss of civility in the debate over federal politics fit right in with the narrative liberal pundits have been pushing since last year: comparing an American president to a murderous dictator is unacceptable…if that president is a Democrat.

Update 7: Every Republican Presidential Candidate Is Hitler by Daniel Greenfield (The “Big Lie” has been around for over fifty years)

Related: How to Prevent America from Becoming a Totalitarian State (tongue firmly in cheek)


… every Republican presidential candidate, from Thomas Dewey (smeared as a Nazi by no less than Harry Truman) to the present will be attacked by the left in this fashion, no matter his temperament, or his small government, libertarian bona fides. … In his 1944 State of the Union address, FDR smeared the laissez–faire Coolidge era of the 1920s as “the spirit of fascism”