writes Benny Huang, as it emerges that the gay movement's martyr was not killed in a hate crime, for the simple reasons that 1) the Matthew Shepard slaying concerned drug dealing (as conservatives have long been claiming) and (this one's the revelation) that 2) the supposed ' “homophobic” rednecks ' were as gay as Matthew Shepard himself was (having shared his bed).


Stephen Jimenez’s The Book of Matt: Hidden Truths About the Murder of Matthew Shepard reexamines the 1998 murder of a homosexual college student in Laramie, Wyoming, and concludes that the media narrative simply doesn’t square with reality.

Shepard was indeed the victim of a very brutal murder but it was never about gay-bashing. It was about crystal meth. The killer and his accomplice were not strangers to Shepard, 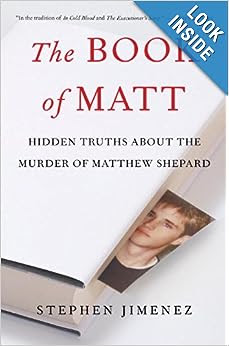 as had been previously reported. They had known each other prior to that night, done drugs together, and one of them had even had sexual relations with Shepard.

As expected, the thesis isn’t going over well with the pink triangle crowd. They will not however, be able to silence Jimenez with accusations of “homophobia.” He is an openly homosexual journalist.

Jimenez’s journey began in the year 2000 when he travelled to Wyoming intending to write a screenplay about the murder. The picture he planned to paint matched the threadbare media narrative exactly because it was all he knew. He soon discovered that most of what he believed about case was a fiction.

It is nearly impossible to overestimate the importance of Matthew Shepard’s martyrdom to the homosexual movement. If he hadn’t existed, they would have had to have invented him. They did invent him, in a manner of speaking. The story of his life and death bares no resemblance to what actually happened. The really nice gay kid who was slain by “homophobic” rednecks for no other reason than his sexual orientation is a myth. He shares a name with the real Shepard—a troubled drug-dealer who ran with the wrong crowd—but little else.

The Shepard murder marked the beginning of the end of rational discussion about homosexuality in this country. Prior to his murder, people could still voice their objections without losing their jobs and being publicly shamed. His murder blurred the lines between ideas and murderous deeds.

Homophobia killed Matthew Shepard. That was the moral to the Shepard story. Holding the wrong beliefs about homosexuality was akin to killing another human being. Belief equals violence.

Time Magazine ran a cover story about the murder depicting the fenceline upon which Matthew’s tortured body was found. The headline said it all: “The War Over Gays.” All wars have at least two sides. Whose side are you on? The side of the redneck cowboy murderers or the seemingly nice young man whose corpse was found on that fence?

… A mother’s mind can become warped by the trauma of burying her 21-year old son. She has spent the last fifteen years believing a lie. But in what alternate universe does a person have to live to believe that a dyed-in-the-wool “homophobe” like me is more guilty of her son’s murder than Henderson and McKinney?

If Mrs. Shepard wanted some good to come of this she could expend her energy educating people on the danger of drugs. She has chosen to defame innocent people instead. “homophobic” rednecks patrols the open range of America in search of the thought criminals who supposedly killed her son. She won’t rest until she’s rounded them all up. The badge she wears is that of a mother’s “absolute moral authority.” Readers should recall that handy term from the summer of 2005 when syndicated columnist Maureen Dowd declared that Cindy Sheehan’s antics were legitimate because she had lost her son in Iraq. Absolute moral authority means that the rest of us aren’t allowed to argue with her because her grievance makes her right.

… the mythical version is a sham. Aaron McKinney wasn’t a “homophobe” but a homosexual. More importantly, he was a methamphetamine addict who hadn’t slept in days. He killed Judy Shepard’s son so he could keep his binge going. He then took the victim’s wallet, coat, shoes, and the key to his apartment so he could burglarize that too. That’s the true story of Matthew Shepard.

How terrifying the truth must be to people who have believed a lie for so long. Why must they cling to this fiction like a life raft in the middle of the wide ocean? The answer is that so much “good” has come out of his death. Matthew’s murder propelled the movement forward. Same-sex marriage was just a dream in 1998; today it’s a reality in eleven states and the District of Columbia. A hate crimes bill that bears his name is now the law of the land. Schools from coast to coast now have anti-bullying codes that ban speech homosexuals don’t want to hear. The Supreme Court has discovered a right to sodomy in the Constitution.