writes Robert Zaretsky of the University of Houston Honors College. 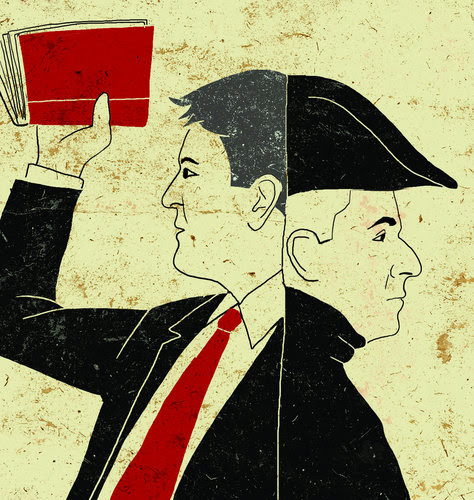 Whether it is the Socialist candidate, François Hollande, or the candidate of the far left, Jean-Luc Mélenchon, citing from or identifying with this hulking literary figure — the 19th century’s greatest poet, novelist and bard of the Revolution — has become de rigueur.

… Long before his death in 1885, Hugo had become France’s four-letter word for revolutionary purity. This reputation was set in motion by Hugo’s ferocious opposition to Napoleon III, who had overthrown France’s Second Republic in 1851 and revived his uncle’s empire and dictatorship.

… [In “Les Misérables,” the riotous work that channeled Hugo’s republican and revolutionary sentiments and that marks its 150th anniversary this year,] Hugo’s concern was the lot of the laboring poor in 1862.

Indeed, this was the meaning of the word “misérables.” At first synonymous with poverty, the word “misère” morphed into “les misérables” — the riffraff and rabble, the superfluous and scum, all thrown up by a society in the throws of rapid industrialization and financial speculation. Through the trials of Valjean and Marius, Cosette and Gavroche, Hugo conveyed the fragility of lives and livelihoods in the face of vast economic and technological forces.

… A technocrat, Hollande declared just a few years back that he never bothered with novels. Similarly, Sarkozy once insisted that the French electorate was ready for a new kind of leader: one who quoted from television shows rather than “The Princess of Clèves.”

… Recently, however, this cultural landscape, flat as a crêpe, has been rented by the man Le Nouvel Observateur calls the “great troublemaker,” Jean-Luc Mélenchon. With his trademark red tie and carnation, the leader of the Left Front — an alliance of Communists and disaffected Socialists — Mélenchon has barreled into third place in the national polls.

… Mélenchon’s politics are unabashedly radical (and for many critics utterly impractical): full retirement pension at the age of 60, the nationalization of energy industries and a dramatic increase in the minimum wage. They are also fully republican: greater independence within the European Union, greater distance from Germany’s suffocating economic policies and greater freedom for the French to pursue their nation’s destiny. At the same time, he disconcertingly expresses his

admiration of Fidel Castro, plays down China’s repression in Tibet, all the while insisting that while Hugo Chávez is not a political model, he is a source of inspiration.

But the other Hugo has been an even greater source of inspiration for Mélenchon. At meetings, he casts a conspiratorial smile to industrial or transportation workers and confides: “I’ve been told I’m too intellectual for you. But the people are, in fact, too cultivated for their leaders.” Donning his glasses, he then reads from “Les Misérables” about the sans-culottes of 1793: “These violent men, ragged, bellowing and wild-eyed, who with clubs and pikes poured through the ancient streets of Paris.”

What Hugo’s sans-culottes wanted was “work for all men, education for their children...liberty, equality and fraternity. In a word, they wanted progress.” While Hollande belatedly announced that “Les Misérables” is his favorite book — thus usurping his previous favorite book, “Le Petit Prince” — Mélenchon now owns the novel. With Hugo’s help, he channels in remarkable ways the anxiety of a growing number of French citizens who ask if progress is possible only by accepting the economic and monetary policies of European institutions that seem no less relentless and rigid as Inspector Javert. Or, instead, as Mélenchon insists, ask if progress is desirable only when “the people reign”? 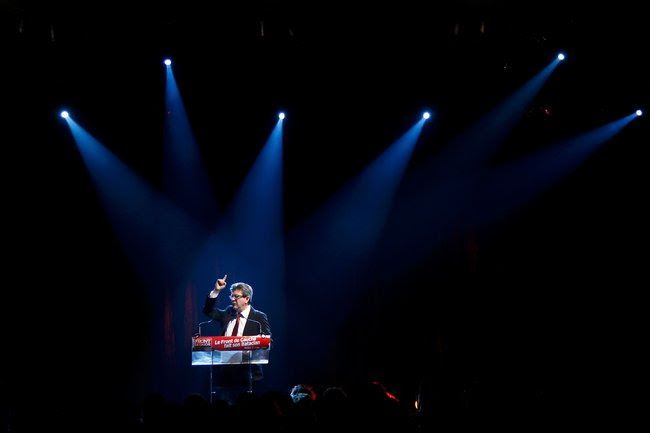 Also check out:
• Smart Diplomacy: A French Presidential Candidate Vows to Valiantly Fight the American Empire and Bring the World Out From Under Its Domineering Shadow

Jean-Luc Mélenchon, that great orator, [as rekindling] the spirit of revolutionary mythology by summoning Robespierre, Fidel Castro, Jean Jaurès, Hugo Chávez and Victor Hugo, while throwing to the wolves the bosses, the bourgeois, the journalists, Wall Street and the CAC 40 index on the Paris bourse. 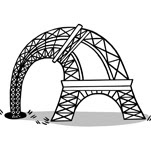 However, with Sam Island's picture of an Eiffel Tower sticking its head in the sand, the French journalist writing for the Frankfurter Allgemeine Zeitung echoes John Vinocur and Liz Alderman as he adds:

But few things have been said about the gravity of the French economic crisis: the deficits in France’s public accounts and balance of payments; its drop in competitiveness; its decline in international commerce; its apathetic growth.

Nor have we heard much about the threat of increased unemployment and reduced purchasing power from the austerity measures that the markets expect any president to take — right after the election, of course. As for civil war in Syria, the perilous transitions in Arab countries, Al Qaeda’s progress in the Sahel, or Iran’s nuclear program, the candidates have behaved as if nothing were the matter — as if France were tacitly abandoning all influence abroad.

These omissions say a great deal about the state of a country that has rarely seemed so avid in its navel-gazing, so inward-looking. In short, France in 2012 is an old nation that increasingly cultivates the temptation to be an island unto itself.

… But all 10 candidates had one enemy in common: globalization, that perpetual movement of capital, people and merchandise that endangers the French social model cherished by 90 percent of French people even as it threatens to definitively bring them to ruin. Among all inhabitants of developed nations, it seems, none hate globalization more than the French. All their political leaders have promised to “fight against” it. But no one fights globalization alone. No one can lie down alone in the path of history with impunity, not even the nation of the artiste Jean Dujardin. 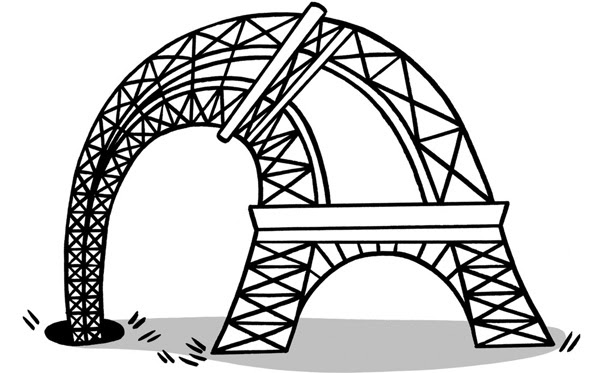