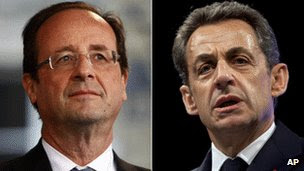 … The warnings spurred derision and defiance with a profusion of dummy results and fun-poking messages on a micro-blogging network where national frontiers no longer exist.

"Netherlands-Hungary qualify for return leg," said one tweet in a play on the name of Socialist challenger Francois Hollande, top scorer in Sunday's vote, and the origin of second-placed President Nicolas Sarkozy's father.

… "According to observers returning from Syria, Russian tanks left at dawn, due to arrive in Paris at 20h (8 p.m.)," read one entry, alluding to a possible left-wing victory and closing time at polling stations.

Other aliases for Hollande included "Gouda", "The Flan", a caramel pudding that resembles one of his nicknames, and more transparently, "The Rose of Correze", combining the Socialist party logo with Hollande's rural constituency in central France.

For Sarkozy, they included "platform heels", a reference to Sarkozy's penchant for shoes that give the diminutive president a few extra centimetres in photographs, "Rolex" in a nod to his taste for flashy wristwear, and "Goulash", a Hungarian recipe.

"Daddy's girl" clearly alluded to far-right candidate Marine Le Pen, who took over from her father Jean-Marie last year as head of the anti-immigration National Front.