Aviation's Debt to the French 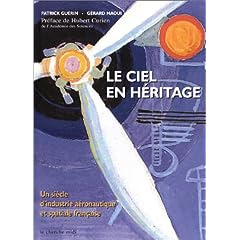 The [Wright brothers] knew [Louis] Blériot well, having traveled frequently to France since 1905, where interest in their airplanes was far more intense than in their home country

The brothers flew in exhibitions all over France and even set up schools in Pau and Le Mans, where pilots trained on Wright machines. “There was a kind of competition and mutual motivation” among the Wrights and the French air pioneers, which included Mr. Blériot, Gabriel Voisin, Henry Farman and others, said Patrick Guérin, co-author of Le Ciel en Heritage (Heritage in the sky), a history of French aviation.

(Not to downplay Guérin's credibility — and not that it necessarily means anything — but for what the news is worth, he is also the author of books on… magic!) Nicola Clark, again:

By the time of the outbreak of World War I, the airplane’s usefulness in the battlefield was clear, and French manufacturers, among the few who were able to build planes in large numbers, became by default the main suppliers to foreign military forces, including the U.S. Army. By 1914, French aircraft were being produced at a rate of around 50 a month, principally by Mr. Blériot and Mr. Farman. By the time the armistice was signed in 1918, the French were churning out more than 2,700 planes a month.

…Today’s aerospace manufacturers on both sides of the Atlantic are postwar creations in terms of their corporate lineage. Yet their debt to the achievements of aviation’s pioneers a century ago is unquestioned.