The French preSS has come down squarely on the side of the rioters. One can only guess that the reason for such an early surrender is that they are afraid that the next step will be bomb belts and suicide attacks. In today's Le Monde, Plantu depicts Interior Minisiter Sarkozy as an American Indian fanning the flames of discontent amongst some burning cars, the better to advance his Presidential run in 2007 (this is probably the first time I've ever seen any French media depict American Indians as culprits). Prime Minister Vilepine is seen in the role of fireman, arriving with buckets of water to douse the fire. Plantu always shows the rioters far in the background as friendly figures wearing urban style rapper clothes. 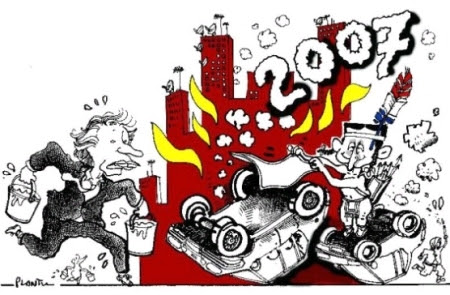