We are dealing with parasitical creatures who, never having done anything practical themselves, insist that the sacrifice of others has no meaning

writes Ralph Peters (thanks to Gregory). Offhand, his New York Post article concerns America's mainstream media, but it also reflects the content of the Europe's MSM and the attitude of Europe's citizenry, as well as the general direction of numerous comments left on this blog (try replacing "our media" with "European public opinion", "journalists and editors" and "opinion columnists" with "Europeans", etc).

Even had the draft constitution been rejected, this would have been a historic moment in the Middle East and beyond. 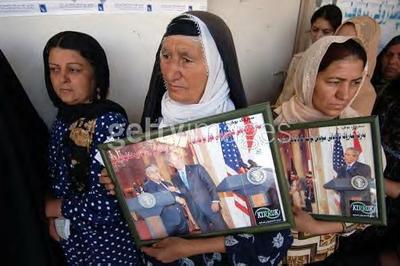 But to suggest that at least 9 million Iraqis casting peaceful ballots don't matter is just sour grapes on the part of those journalists and editors who've have been relentless in predicting failure in Iraq — and who've been wrong every single time.

… Iraq may yet fail as a unified state. Violence will continue. But what's frustrating is the determination of so many in our media to convince the American people that Iraq's a hopeless mess. It's an example of vanity, selfishness and spite virtually without precedent in the history of journalism.

The greatest tragedy imaginable for our "mainstream media" would be to have to admit that President Bush was right about Iraq.

A startling number of editors and opinion columnists have been wrong about every development in Iraq (and Afghanistan). First, they predicted a bloody, protracted war against Saddam's military. Then they predicted civil war. They insisted that Iraq's first elections would fail amid a bloodbath. Then they declared that Iraq's elected delegates would not be able to agree on a draft constitution. Next, they thundered that Iraq's Sunni Arabs wouldn't vote.

Most recently, the sages of the opinion pages declared that the proposed constitution would be defeated at the polls by the Sunni Arabs. All along they've displayed a breathtaking empathy with the Islamist terrorists who slaughter the innocent, giving Abu Musab al-Zarqawi a pass while attacking our president and mocking the achievements of our troops.

A herd mentality has taken over the editorial boards. Ignoring all evidence to the contrary, columnists write about our inevitable "retreat" from Iraq, declaring that "everyone knows" our policies have no chance of success.

That isn't journalism. It's wishful thinking on the part of those who need Iraq to fail to preserve their credibility.

We are dealing with parasitical creatures who, never having done anything practical themselves, insist that the bravery and sacrifice of others has no meaning. Their egos have grown so enormous that they would sacrifice the future of Iraq's 26 million human beings just so they could write "I told you so." And, of course, the greatest military experts are those who never served a day in uniform.

… Our columnists and editors resemble those diehard communists who kept on praising Stalin right through the purges, the Molotov-Ribbentrop Pact and the revelations about the Gulag.

We'll hear that Iraq's new constitution is flawed (so is ours — that's why we have amendments). We'll be told that the Sunni Arabs are dissatisfied (so are many American Democrats). Allegations of electoral fraud will never go away (sound familiar?). And political partisans will continue to claim that our military efforts are useless (as demagogues have claimed since the Civil War).

Despite the attacks by international terrorists and the media, Iraq continues to move forward. The process is imperfect, as are all things on this earth. But the bravery and determination that Iraqis displayed at the polls again last weekend deserve better analysis than smug pundits' party-line declarations of failure.