Larry Elder takes a dinner companion up on the casual nature of discarded lies.

«"Assume this is a pie," I said, cupping my hands in a circle. "The top 1 percent contributes what size slice -- by percentage -- of that pie?"

Update: With thanks to Phil of Finland for thought, we find the biggest hypocrite:

« One of the most persistent themes in Chomsky’s work has been class warfare. He has frequently lashed out against the “massive use of tax havens to shift the burden to the general population and away from the rich” and criticized the concentration of wealth in “trusts” by the wealthiest one percent. The American tax code is rigged with “complicated devices for ensuring that the poor — like eighty percent of the population — pay off the rich.” 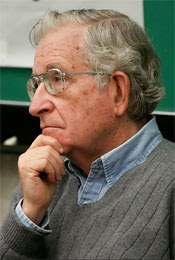 Chomsky’s business works something like this. He gives speeches on college campuses around the country at $12,000 a pop, often dozens of times a year. Can’t go and hear him in person? No problem: you can go online and download clips from earlier speeches-for a fee. You can hear Chomsky talk for one minute about “Property Rights”; it will cost you seventy-nine cents.»