Inside the Paelsetinians' Murder, Inc. 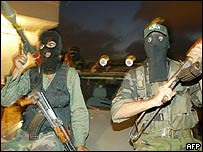 These dime-store Schickelsgrubers have killed this Schickelsgruber. Confirming that the Pali militants never evolved beyond their past behavior seen in southern Lebanon during the civil war.

That it occurred over a political disagreement sure makes a joke out of their babbling on about a commitment to peace, love, and understanding, and especially to all the people duped from the outside by suspicious NGOs into funding this rollerball drome of their violence which this pathetic lot consistently refuses to mention.