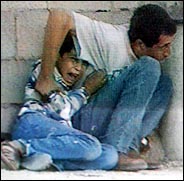 Like John Rosenthal, Melanie Phillips discusses Nidra Poller’s authoritative summation of the Al-Dura affair, where a France 2 TV news-crew was found to be complicit in constructing inthifada “oppression video” – the set up of which got a child killed, and not by the IDF, but by a Palestinian combatant.

«The rest, as we say in French, is literature. There can be no further attempts to reconstruct the incident by adding to those 55 seconds since, as France-2 has now revealed, there is no additional footage.»

It needs to be understood how difficult is was for this story and it's investigation to get out. For nearly a year the segment’s producer as well as their news executives stonewalled. At its’ core is the very worst of journalism – making the news that you’re supposed to report. It’s beyond unethical, it’s an empirious abuse of one’s position, especially when the employer is a state funded broadcaster.

« It was later on that same day that a cameraman for France-2, a channel of the state-owned French television network, captured the death of a twelve-year-old Palestinian boy, allegedly shot in front of his helpless father by Israeli soldiers in the Gaza Strip. A news report, dramatically narrated by France-2’s Jerusalem correspondent, was instantly aired and was offered free of charge to the world’s media.

The effect was immediate, electrifying, and global. Overnight, Muhammad al-Dura became the poster child of the incipient Palestinian “struggle” against Israeli “occupation” and a potent symbol of the genocidal intentions of Israel’s government. A doctored photomontage was soon produced for Arab-Muslim viewers, featuring an imported image of an Israeli soldier apparently shooting the boy at close range.»

And it isn’t without larger consequences:

« That the death of Muhammad al-Dura was the real emotional pretext for the ensuing avalanche of Palestinian violence—and a far more potent trigger than Sharon’s “provocative” visit to the Temple Mount—is attested by the immediate and widespread dissemination of his story and of the pietà-like image of his body lying at his father’s feet. Streets, squares, and schools have since been named for the young Islamic shahid. His death scene has been replicated on murals, posters, and postage stamps, even making an iconic appearance in the video of Daniel Pearl’s beheading. His story, perhaps the single most powerful force behind the Palestinian cult of child sacrifice over the last years, has been dramatized in spots on Palestinian television urging others to follow in his path, retold in a recruitment video for al Qaeda, and immortalized in epic verse by the Palestinian poet Mahmoud Darwish.»

That avalanche has led many to their deaths in Israel, the West Bank, Gaza, and everywhere a Jihadist was inspired by France 2’s staged footage.

« Within days, an elaborate narrative was being disseminated to flesh out the elusive details of the 55-second video. On October 3, 2000, testifying under oath before the Palestinian Center for Human Rights, the cameraman Talal Abu Rahmeh alleged that Israeli soldiers had intentionally, in cold blood, murdered the boy and wounded the father. Abu Rahmeh’s testimony was precise and vivid. There had been, he said, a five-minute exchange of fire between Palestinian policemen and Israeli soldiers. This was followed by fully 45 minutes of gunfire coming exclusively from the Israeli position and aimed directly at the man and the boy crouching desperately behind a concrete barrel. According to the cameraman, he had captured on film a total of 27 minutes of this fusillade, risking his own life in the process. As an experienced war photographer, he could attest without hesitation that the Israeli outpost was the only position from which the boy and the man could be hit.

[ … ]
But we do have extensive evidence of what was occurring at Netzarim junction on September 30, 2000. More than a dozen cameramen were at the junction filming the action that day. They were all Palestinian, but they were working for Reuters, AP, NHK, France-2, and other prestigious networks. Aside from Abu Rahmeh’s footage, brief excerpts from what they shot have appeared in news broadcasts. But hours of outtakes also exist, and their eloquence is astounding. I cannot claim they show everything that happened, but enough raw footage exists to substantiate what follows.»Jeambar was lauded by the media and the ‘high society’ of France’s political and social life. Under scrutiny, Jeambar’s story fell to pieces.

«But the bubble of tolerance protecting the French media had begun to stretch and tear. Three months after their October 2004 meeting with France-2, Denis Jeambar and Daniel Leconte came forward with their side of the story. The gist of their essay, published in Le Figaro after being rejected by Le Monde, confirmed the MENA release while chastising both Rosenzweig and MENA for jumping to the unwarranted conclusion that the death scene had been staged. Jeambar and Leconte also enjoined France-2 to make a full disclosure, withdraw its unjustified accusations, and recognize the incalculably damaging effects of its report in inciting violence and blackening Israel’s name.»

Immediately, someone needed to save his hyde.

« The very next day, Enderlin responded with an article in Le Figaro suggesting that his distinguished colleagues join him in a sort of gentleman’s agreement to lay the affair to rest. His broadcast may have been hasty, he wrote, but it was justified on the grounds that the public had to know the truth, because so many children were being killed. He should have said, “were going to be killed,” because Muhammad al-Dura, as his father proudly proclaimed, was the first

shahid, and Enderlin’s broadcast itself was instrumental in much of what followed. But, more than four years later, Enderlin was still trying to defend his report as an accurate reflection of the situation on the ground.»It’s a fascinating look into the ugly world of news-making, and another kind of post-mortem for an ‘activist’ press which would like to think it owns its’ own facts, and the right to get a child killed for THEIR flavor-of-the-week cause.