One has to wonder what end do the French Education Ministry seeks to reach when it deems appropriate to permit such propaganda to be distributed to youngsters at a very gullible and influenceable age.

VCrisis has more (gracias para Hervé) on the French high school course depicting "a romantic view of a kind leader" and of "a role model":

Hugo Chavez qualifies in the category of icons for the French seem to have a knack for despot and tyrants, [those] who happen to live in far away lands.

The high school book, of course, is part of the vaunted programme of the éducation nationale, which commentors on this blog have lauded as entirely fair, just, and objective (and aren't we silly to believe otherwise?), not to mention in symbiosis with les valeurs républicaines.


The Economist chimes in:

…with the 51-year-old Mr Chávez on course to win total control of parliament by early next year, and planning to remain in power for another quarter of a century, “the law” is likely to become whatever he wants it to be.

One may also wonder to what end the following atmosphere exists in France:

The stories that some [Venezuelans] have in regards to plain bullying and outright harassment by the Bolivarian Circles of Paris and its French counterparts, read Le Monde Diplomatique and its director's ATTAC group, are, quite frankly, outrageous.

It may be, though, that the end maybe isn't so mysteriours. While millions of French subjects rail about America's propensity for oil and Bush's ostensibly waging a war for same, VCrisis points out a similarity with the French government's relation to Saddam Hussein:

President Chirac; is the Orinoco oil belt worth the indoctrination of France's teenagers?

Only: in cases of the French (or their leaders) selling out French principles and virtues for oil, there are very few Frenchmen and -women to rail and rave and march through the streets of Paris… 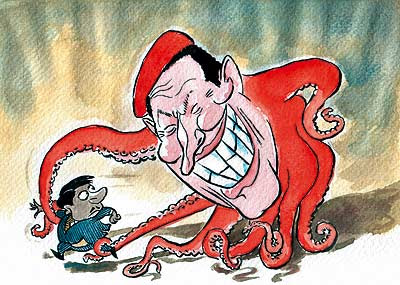