Is this sounding familiar? Obama's Predecessor of Sorts at the Helm of New York City

As Ann Coulter writes in her (brilliant) new book, Mugged (Racial Demagoguery from the Seventies to Obama), Barack Obama has a predecessor of sorts, from the 1980s and 1990s and on the urban level — and not just in any city…


The Obama presidency has been like [New York's] David Dinkins mayoralty all over again, with utter incompetence being papered over with appeals to white guilt.

… In a world of Sharptons, Masons and Maddoxes, Dinkins came across as the kinder, gentler black man.  Just like Obama. 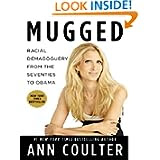 … Suddenly, newspapers were full of references to "the historic nature" of Dinkins's candidacy and bubbling with enthusiasm at the prospect of Dinkins becoming "New York City's first black mayor."

Is this sounding familiar?

… even if Giuliani would make a better mayor, you had to vote for Dinkins [in 1989] or blacks would say it was racist — just what Jacob Weisberg said about Obama twenty years later.

Dinkins won the election and, in no time managed to turn a city that was already dysfunctional into Dante's inner circle of hell.

The hope that his election wold bring an end to raging racial wars turned out to be unfounded.  Dinkins's reign was marked by constant racial tumult — marches, riots, protests and a string of alleged racist incidents, with the mayor invariably taking the side of criminals against the police.  No accusation of racism was too implausible to prevent a Dinkins press conference denouncing racism.

… This was the re-election campaign for the city's first black mayor.  New Yorkers had already voted for him once.  Had they not realized Dinkins was black in 1989?  But unless voters stuck with a disastrous black mayor, they were racists.

… White guilt has never produced anything but catastrophe.

White guilt fueled the liberal crime policies that resulted in tens of thousands, maybe hundreds of thousands of murders, to say nothing of maimings, burnings and rapes.  White guilt got us huge tower blocks of public housing that are fortresses of social pathology.  It produced the entire entitlement-dominated politics we have now.

… The national obsession with racism is a self-inflicted punishment that has resulted in disaster, for everyone, but most of all for black people.  The initial lie from which all other lies flow is the idea that black people's condition in America depends on white people's beneficence.  It's Bull Connor's last revenge.