AP: Elementary My Dear Watson — This Is How You Can Tell If a Criminal Is Black

Two young women are dead, first tortured, and then murdered, in atrocious conditions, and we know that the perpetrators are black or members of a minority.

How the devil do you know that, Holmes? Given that there is no mention of the alleged murderers' race in the Associated Press article?

Elementary, my dear Watson: both women are members of minorities, at least one is definitely black (am I guilty of racial profiling for pointing this out, Lestrade?), probably both are or identify as such, and… there has been no uproar over racism among the élites and in the mainstream media (including this very article by the Associated Press).

Ergo — the killers are black, or at least members of minorities, and this is a story that should blow over much more quickly than the one of a violent male nearly as old as they, killed during a one-to-one struggle down in Florida.

No mention of the killers' premeditation, not to mention their likely larger body weight 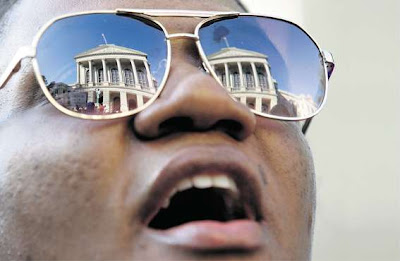 (and few references to the cowardly group's numerical superiority along with — am I guilty of sexism for pointing the following out, Lestrade? — the outnumbered females' natural physical inferiority), and little chance of a statement from the White House pointing out that if Barack Obama had a third, elder, daughter, at least one of the women, and possibly both, would look like her… ("If I had two elder daughters, they would look like Abreeya and Ashley"?)

And let's not even get into the fact that the situation could have turned out differently if either Abreeya Brown, 18, or Ashley Conaway, 22, had had a gun in their purse and had had the time — and the training — to use it…

Related: Regarding the Trayvon Case, Le Monde Suggests America as a Place Where James Bonds with Licenses to Kill Run Around, Gunning Innocent People Down
Posted by Erik at 08:35