When Dominique Strauss-Kahn was arrested in New York on sexual assault charges, 57 percent of the French said he was the victim of a plot, according to a poll by four Paris media groups. Who set him up? A separate description of public opinion pointed to Nicolas Sarkozy. … The contributors’ list [on a website for the news magazine l’Express] of suspected instigators began … with the president, followed by “the Americans.”

In the International Herald Tribune, John Vinocur takes on the président described by Franz-Olivier Giesbert, author of M. le President, as “a man from nowhere” and “a little tyrant,” in love with money and rich people.

This reaction in French public opinion looks like another turn in what appears increasingly as Mr. Sarkozy’s demonization. …

But in France, a segment of the French was reported imagining Mr. Sarkozy’s hand in the fall of the probable Socialist candidate.

Why? There are, by unscientific count, three books out now, all explaining how the president inspires or is portrayed as inspiring hatred. They contain rationalizations, defenses, prejudices and varying examples of meanness (from both the authors and their subject) that provide no single answer — while leaving Mr. Sarkozy, in the phrase of essayist Pascal Bruckner, as “France’s voodoo doll.” 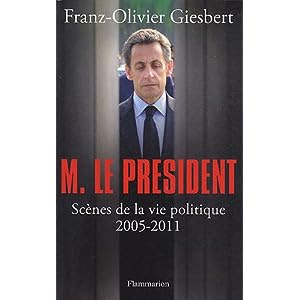 Explanations abound for his negative performance rating of 72 percent. There’s the obvious stuff: 9.6 percent unemployment last month, the nonappearance of a promised “buying power presidency,” and a sense among a meaningful slice of voters that French specificity is drowning in a globalized world.

But how does this add up to rage, hysteria, or indeed to what Mr. Bruckner has called “this hatred, out of all proportion, against him”?

… Dominique Wolton, a French academic and media critic, has since described a type of relationship between “a little caste of columnists and star journalists” and many French politicians as “intolerable collusion.”