The Philosopher Who Alone Persuaded Sarkozy to Intervene in Libya

Making his mark young as a philosopher, [BHL] was satirized neatly by a critic with the words: “God is dead, but my hair is perfect.”

Thus does Steven Erlanger start his New York Times article about the philosopher who alone, by his own reckoning, made Libya a French cause.

…in the space of roughly two weeks, [Bernard-Henri Lévy] managed to get a fledgling Libyan

opposition group a hearing from the president of France and the American secretary of state, a process that has led both countries and NATO into waging war against the forces of the Libyan leader, Col. Muammar el-Qaddafi.

It was Mr. Lévy, by his own still undisputed account, who brought top members of the Libyan opposition — the Interim Transitional National Council — from Benghazi to Paris to meet President Nicolas Sarkozy on March 10, who suggested the unprecedented French recognition of the council as the legitimate government of Libya and who warned Mr. Sarkozy that unless he acted, “there will be a massacre in Benghazi, a bloodbath, and the blood of the people of Benghazi will stain the flag of France.”

“I’m proud of my country, which I haven’t felt for many years,” Mr. Lévy said in an interview. “When I compare Libya to the long time we had to scream in the desert about Bosnia, I must agree that despite all our disagreements, Sarkozy did a very good job.”

…[B.H.L.] has outdone himself on Libya, playing to Mr. Sarkozy’s vanity and need for success as well as gratifying his own, and it is hard to say who used the other more.

It is an extraordinary tale, about which neither the Élysée Palace nor the Foreign Ministry wished to comment, other than quietly urging a grain of salt. 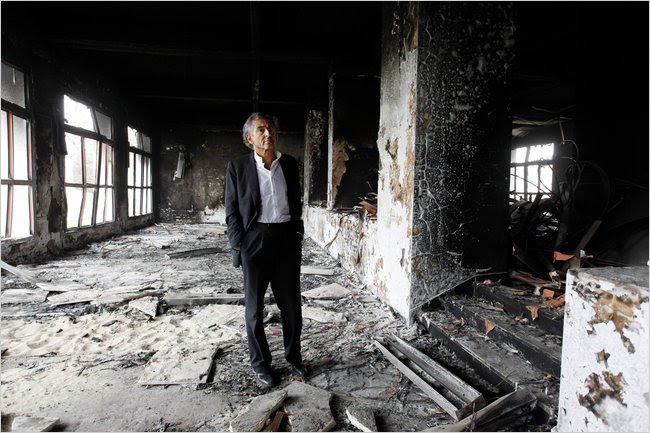