Where Paranoia Sells Itself

The funny thing about the way this one is being sold, is that the word “roman” or fiction isn’t presented readily, and the cover has the air of oh-so-many screeds of commentary. 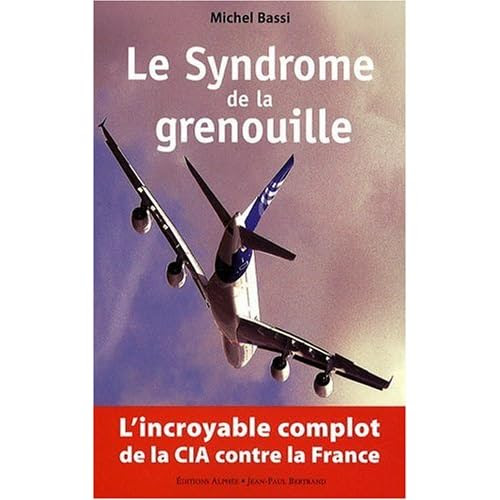 Obviously alluding to 9-11, and the conspiratorial theories that are bound up with it. Inevitably, all of these plausited theories point their hints to them having to do with something nebulous cant about the world somehow being after France. As always, your pain is their gain.

From the publisher’s write-up pitching this thing:

Here is the incredible story of an industrial Waterloo in the aerospace industry inflicted by a French-German-American conspiracy fomented by the CIA to maintain the global supremacy of Boeing. A fiction that goes to the heart of the scandals of the last ten years, from the Taiwan frigates to the Clearstream affair, which shines an unexpected light on them too.

The novel blends fiction with reality: Concerned that French aeronautics was threatening the supremacy of American industry, the CIA in 1997 instigated an incredible conspiracy that will plunge you into cold water will become hot enough to kill! This is the famous “frog syndrome.” Immerse a frog in boiling water, and she’ll struggle furiously. Immerse a frog in cold water and raise the heat slowly, and she doesn’t know she’s cooked!

Here is a book that you wont be able to put down until the end. It’s embedded with the history of the last ten years, going right into the heart of the state and industry. We are like the frog, trapped in this reality which takes shape gradually, perhaps even further than this story supposes! The author has, in fact, mixed fiction with facts known to every keen observer, and has both fictional characters from the real adventure of global aviation, to the highest levels of responsibility and industrial policies, France, Germany and the USA.

This story contains not a surprising authenticity. Reached out to show an imbroglio of politico-industrial complex in the heart of a fierce economic espionage, one cannot put it down without saying:

"And what if all of this was true?"

Don’t worry, to the feeble-minded, it will now become true.

Curiously, all of the real scandals Bassi cites are European in origin, and the idea that it can be alleged to “seem accurate” in a world where Airbus has being engineered with tax monies to decades to try to insure supremacy, is a theme we see over and over: Europeans who feel inferior, even in their wealth, success, and protective cocoon wallowing in self-pitying thoughts of their own victimhood.

That fantasies about industry continue to crop up makes sense, because it’s all the reader would think his nation has of value to any of their imagined enemies in the world. They bind up industry and state, use their intelligence assets to the service of state industries, therefore it must be imagined that everyone else does – otherwise the venality of the degree with which it permeates their own society must then become acceptable even in the eyes of the anti-industrial, anti-corporate “humanist”.

It is the same old story of a world after their dear, sweet imagined selves, living innocently in their humble little village, and that all their misery is the cause of a silent force from without, just as it was for the arbitrary and morally empty mythology of the ancient world along the model of: only the people who hate you personally could have invented AIDS.

Amazingly enough, if any of their machinations founded in an incongruous self-importance even were the slightest bit true, they would deserve it.
Posted by Joe at 13:23