Can't Say the California Dude Ain't Got a Point: The Constitution's Right to Show One's Perfectly Toned Upper Limbs Shall Not Be Infringed 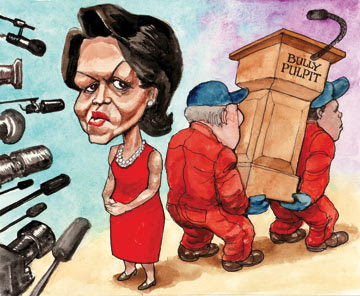 writes Skip Kilmartin of El Sobrante, California, as he points out to The Economist (a typical lay-off-the-Obamas-or-you're-nothing-but-a-sorehead article, alas) that there is one area in which criticism of Michelle Obama is off-bounds (thanks to the Bill of Writes).

Being familiar with constitutional law, perhaps Barack Obama could put this particular fashion controversy surrounding his wife to rest by referring to the second amendment’s right to bare arms.