arguing that Mr. Obama's approach to foreign policy has restored "a sense of humility" that "was missing" in the past.

Bullship! First of all, there is reason to put that statement into doubt (certainly where it matters).

More to the point, what has happened can best be compared to the hypothetical case of another African-American I heard about last year. What would you usually expect from challengers of Tiger Woods? For them to try to play golf as well as or better than the champion, correct? What the whining around the world amounts to is, "Tiger Woods is unfair", and under the policies of Barack Obama's administration, we have a Tiger Woods promising he will no longer play as well as he usually does, but that he will play as badly (relatively speaking) as his competitors.

This is healthy neither for America nor for other nations or the world at large, and yet that is what "a new receptivity" to U.S. interests amounts to. If "anti-Americanism isn't cool anymore," it's because of America's willing joyful caving in to to the worse angels of our (or of foreigners') nature, such as (often state-inspired) jealousy and resentment.

Furthermore, it can hardly be true that talking to a strongman or a dictator is equivalent to talking with the despot's citizens — especially his victims — unless you take for granted that the tyrants' spokesmen and his suave diplomats at the United Nations speak for the masses in his freedom of speech-deficient country; and unless you believe that the government — that any government — is (can only be) ipso facto representative of the people. Then again, that is what the leftists in government, academia, and the mainstream media believe, isn't it?…

Update: David Axelrod was recently interviewed in Le Monde, but it would seem that the daily forgot to put the interview online…

The fundamental role of anti-Americanism in Europe in general, and particularly among those on the Left, is to absolve themselves of their own moral failings and intellectual errors by heaping them onto the monster scapegoat, the 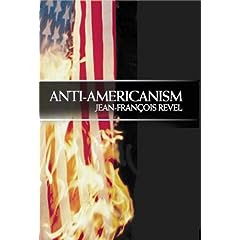 United States of America. For stupidity and bloodshed to vanish from Europe, the U.S. must be identified as the singular threat to democracy (contrary to every lesson of actual history). Thus, during the Cold War, it was dogma among Europeans from Sweden to Sicily, from Athens to Paris, that the "imperialistic" power was America, even though it was the USSR that annexed Eastern Europe, made satellites out of several African countries, and invaded Afghanistan, even though it was the People's Republic of China that marched into Tibet, attacked South Korea, and subjugated three Indochinese countries. A similar dynamic applies today in the war on terror.