Note to the Apologizer-in-Chief: No, a Republic Is Not Equal to a Dictatorship

Barack Obama … feels like he has been successful in ensuring other world leaders that "there are no senior or junior partners — we are simply partners." 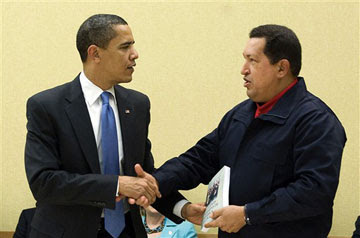 Note to the apologizer-in-chief: no, all nations are not equal; a republic is not on the same level as a dictatorship!

Not least — Not least (!) in the minds of the strongman's victims, whether they be the intimidated and/or silenced dissidents; the jailed opposition members; the murdered opponents; or simply the citizens who are prevented from finding (and taking) a job of their liking, or their kids a school of their choice…

As he did on a recent trip to Europe, Obama stressed in Latin America that the United States is a willing partner, "inclined to listen and not just talk," in trying to advance national interests.

"We recognize that other countries have good ideas, too, and we want to hear them," he said, adding that the fact that an idea comes "from a small country, like Costa Rica," should not diminish its potential benefit.

The whole problem with strongmen, on a domestic as on an international level, is that they are the ones who are not willing to listen — although they love to pretend they do — and that what they want Washington to listen to (without Washington saying a word, precisely) is, overtly or otherwise, for the state of human rights in their nations (i.e., the power of the citizen to be listened to, including if he is a critic of the strongman's government) to be ignored or belittled… Regarding Obama's contention that "It's hard to believe we are endangering the strategic interests of the United States" by talking with Chavez since Venezuela has a defense budget about one-six hundredth the size of the United States', and owns Citgo, the oil company: and how does Caracas's offense (sorry, defense) budget compare with that of neighboring Columbia's?! And is Russia's placing navy vessels and long-range bombers in Venezuela to be ignored in estimating Columbia's defense budget?! This type of context-less quote is nothing more than a pass to always go and apologize, to always go and bow down, to always surrender your principles (gracias para Larwyn)…

While pundits denounced the "evil empire" speech, political prisoners in Russia spread the word in their dark, damp cells. They tapped on walls and quietly talked through toilets to share what Reagan had said. Natan Scharansky remembers feeling energized and emboldened; Reagan had given them hope.

To quote Natan Scharansky himself:

the great brilliant moment [was] when we learned that Ronald Reagan had proclaimed the Soviet Union an Evil Empire before the entire world. There was a long list of all the Western leaders who had lined up to condemn the evil Reagan for daring to call the great Soviet Union an evil empire right next to the front-page story about this dangerous, terrible man who wanted to take the world back to the dark days of the Cold War. This was the moment. It was the brightest, most glorious day. Finally a spade had been called a spade. Finally, Orwell's Newspeak was dead. President Reagan had from that moment made it impossible for anyone in the West to continue closing their eyes to the real nature of the Soviet Union.

Then again, it is true that such a strongman attitude is precisely what more than a few have charged Obama with wanting to do to his opposition (cf the Rush Limbaugh controversy, etc)…

That is why defense budgets must fall during a Democrat administration, in favor of social policies! Because there are no real enemies — not abroad, at least (and so there is no real bowing, kowtowing, and "surrendering of principles").

The only real enemies are American conservatives, and they are the ones that must be fought, tooth and nail, and fought against with a federal budget that batters defense expenses while inflating all kinds of social spending!
Posted by Erik at 18:47