[Bernard] Kouchner is a devotee of crisis, drama, danger — a résistant eager for an evil worth resisting 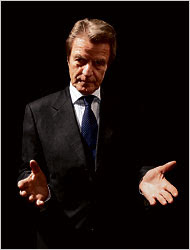 Over time, like a number of European intellectuals, Kouchner migrated from the radical left to the antitotalitarian center. In 2003, he argued for a humanitarian intervention to oust Saddam Hussein. He is, by French standards, stoutly pro-American. On foreign policy, with only a few exceptions, he shares the views of the conservative Sarkozy. In less than a year, the two have torn France loose from its Gaullist moorings. They have, however, run into opposition at home; the French seem to be suffering from a serious case of motion sickness.

…Christine Ockrent, Kouchner's wife and one of France’s most admired journalists, told me, “The reason they get along so well, which is kind of surprising, is that they prefer action to theory.” They share a metabolic intolerance for the great French indoor sport of abstract speculation.

…Kouchner had just come from Washington. “There is a change in the relationship,” he said. “It’s not the return of France to the U.S., but the return of confidence between France and the U.S.” Important disagreements remained, but he had told Secretary of State Condoleezza Rice, “I will never betray you” — a blunt reference to January 2003, when Dominique de Villepin, then foreign minister, shocked Rice’s predecessor, Colin Powell, by abruptly announcing that France would never support an invasion of Iraq.

…But the French are far more comfortable with, or at least accustomed to, Gaullist realism; and, at least in the cafes and parlors of Paris, Kouchner is routinely tarred as a “neoconservative.” This term, which has virtually replaced “fascist” as the epithet of choice on the left, more or less means “one who wishes to use the instruments of state to promote values,” though of course, post-2003, it carries the whiff of “warmonger” and “American lackey.” Kouchner did, in fact, envision a humanitarian intervention in Iraq, blessed by the U.N., as the supreme achievement of the doctrine of ingérence.

…For Kouchner, all this is part of the same battle he’s been waging with the left since he started picking up boat people in Vietnam: “Are they concerned about victims? No, they are not. They were not. The first slogan before the creation of M.S.F. was ‘There are no good and bad victims.’ For them, bad victims exist.” Abstractions mattered more than people. It was, in other words, something Kouchner — and not only Kouchner, perhaps — disliked about the French.

“What do you mean ‘back’? Are you saying that the French had disappeared?”

“We were there; but we were not a factor.”

“No, no, it was Chirac. Chirac!” And now Kouchner told me that when he and Sarkozy met with Bush, Bush said, “Chirac promised me that in the end he would be with us on Iraq. And then he betrayed us.”