Just nod and play along, and they might wander away.

When the non-professionals and the uninitiated meddle

Why these people who promote environmentally damaging ideas can’t be removed from Government, I’ll never know. It’s likely a PR game where leftist will call “devastation” and again say that the world will end if you move their cheese.

(Washington, D.C. - May 3, 2006) Imagine a world where houses are built from plant materials* instead of cement and bricks. Drinking water is disinfected by solar energy, not chemicals. And homes are designed to harvest rainwater to supply hot and cold water. It's not a far away dream - you can see it next week at the first National Sustainable Design Expo on the National Mall in Washington, D.C., May 9-10 which showcases the best new designs for sustainable products and technologies, also called "green technology."Amazing. Here’s someone organizing an event that they want Builders, Architects, and Engineers to take an interest in and they use the colloquial term “Cement” that even most homeowners don’t use.

All frame houses in north America have been traditionally made from a “plant material” called Mister Tree. The goal of the past half century for the profession at large, and for all people who could afford it, was to build out of materials that make for “sustainability” because they don’t decompose – typically “cement” and bricks. In other words they have a long, meaningful lifespan. Significant ammounts of energy don’t need to be expended rebuilding them, or demolishing and replaceing them.

As for collecting you drinking water from your own roof – that’s where drinking water comes from anyway. By trying to do this yourself, all you’re doing is spending wads of money to replicate what municipal systems already do, all without having a pump in your house that will eventually fail.

Case in point, anyone who has had to draw their domestic water from a well (known in some parts of the world as a borehole,) is usually delighted when utilities are extended to their area.

The ground, by the way might either be drawing from that very same rain, or from an aquifer recharged by those rains. So all you’re doing is spending money and effort on a cistern and pumping system, each of whose parts as well as the effort it takes to install it, contains embedded energy wasted on ones’ own moral vanity. I’m sure it might make sense to you if you’re a enviro Ted Kaczynski type, but hardly a myth worth promoting among those who cant seem to add. 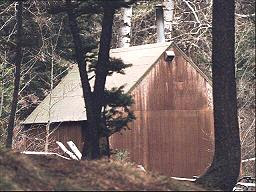 * Kaczynski’s rotting crib – formed nearly entirely from “plant matter.” It will have
to be demolished and disposed of within 20 years of its’ construction.
The fuse is lit!