Even if the west stopped, others would still be at war with her

The Guardian reports that a three page fax in Arabic sent to the Vatican appears to be attributed to al-Queda. It threatens the usual hellfire, but includes an olive branch to the duped and comfortable left:

«The three-page document, written in Arabic, accuses the Vatican of supporting "the capitalist countries" who joined the war in Iraq and justifies terror attacks in Britain and Spain as "self defence against terrorism in Iraq and Afghanistan".»

The Guardian, however, starts spinning it in the very next paragraph:

«The threats are bound to increase nerves in Italy, which has long feared it could be the next European country to be targeted by Islamists because of the government's support of the Iraq war.»

The editors refuse to believe that there isn’t a disconnect here. Radical Islam is engaged with a holy war against an opponent who isn’t, and the screwy left is accusing the leaders of the west of being the zealots conducting a religious war. It’s astounding. Victor David Hanson: 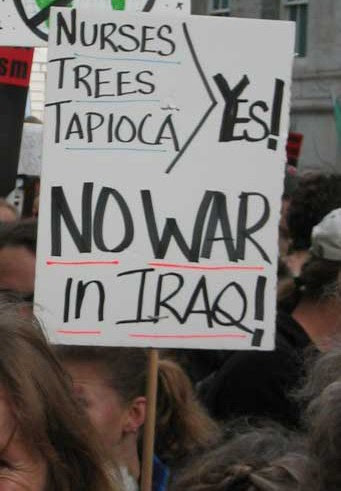 «In the age of utopianism we demand impossible standards of perfection. Then when they cannot be met, we conclude that we are not good at all, but the equivalent of a Pol Pot, Hitler, or Saddam himself — an elected American president who is a worse terrorist than Osama bin Laden.

[…]
Second, we don't believe that we are in a war anymore. Jimmy Carter thinks that something we do in Guantanamo galvanizes terrorists, as if the camp had been in existence since 1979, when under his watch this present quarter-century cycle of killing and terrorizing Americans with impunity in the Middle East began in earnest. Thus instead of joining in the effort to defeat Islamic fascists, the opposition and our pundits nitpick and moan, hoping for media attention and political points, convinced that none of their triangulation aids the enemy — since we aren't really in a war at all.
[…]
Yet the United States itself has not changed its character under Republican hands. Its government and people are as they were, thus ensuring the more the Left lashes out about losing the republic, the more their charges seem strident and extremist — bringing them shame as the additional wage to their irresponsibility.»It also reminds me of what so called “moderates” are rattling on about. VDH again points out what sort of speech coming the western press will not report on.

«This last May — and out of the hateful mouth of a prominent Palestinian cleric, Sheik Ibrahim Mudeiris. He was broadcast on a Palestinian Authority station.

The televised Sheik finished with an even more frightening thought: “The day will come when everything will be relieved of the Jews — even the stones and trees which were harmed by them…The stones and trees will want the Muslims to finish off every Jew.”

Nothing could be clearer than that promise of another holocaust — and promised explicitly on state-run Palestinian television, a public megaphone of the Palestinian Authority, itself the beneficiary of past and apparently promised future American financial aid.

Still, don’t hold your breath that the passive/aggressive sheik is about to lead a pan-Islamic army a few miles across the border to “finish off every Jew,” since he might then end up like Sheik Ahmed Yassin, whose threats of death earned him instead an early paradise.»

He goes further in examining the Islamist’s gripe, but I think you know where it goes. If the calls to behead and drink blood weren’t a conscious construct, it would sound like the delusions of a madman cornered by his own past and his manhood. One thing is certain, it isn’t an act on behalf of the poor or oppressed.
Posted by Joe at 13:48