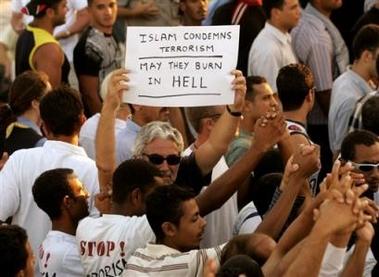 Glenn Reynolds points out that there ARE arabs who bravely and vocally oppose terrorism and the feudalistic preactitioners of that dark art, but that the western press doesn't really want to know, or doesn't know how to get past their own precambrian ideological filter:

«What's depressing is how little attention these demonstrations got from the media (you'll notice that most of the links above are to blog reports, not news stories). If any of these groups had blown something up -- or even just burned President Bush in effigy -- they probably would have made the evening news. But when Arabs and Muslims defy news-media typecasting, they seem to be ignored.»

Organized by Cairo blogger Karim Elsahy, attended also by the widely read Big Pharaoh were there. More photos were carried by GatewayPundit who noted that even tourists (the usual intended target in Masr) joined in. Of course like all closed and untrusting regime des bananes the cops (who are usually in tactical uniforms) busted it up like all good paranoiacs do.

«People started looking and reading what was written. A number slowed down just to read what we were displaying. Others sounded their car horns. I felt we were getting a very positive response from the people until Egypt's "do-not-disturb-the-peace-whatsoever" police destroyed our utopia and our ecstasy the same way Samson destroyed the temple.»

So the question is: where IS the damned media? Do they really want these particular Arabs to be on their own on this one? Historically, radicals with the passivity adn sheepishness of the rump of the population would treat these folks the way Arab Jews and Christians have been treated: driven off and marginalized while killing a few by example or to indulge baser emotions. 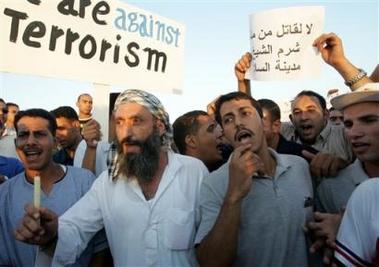