But They're Just Bored Gangsta Thugggz... 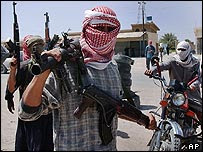 «"At least seven people from France have died... fighting for al-Qaeda's cause, some in suicide attacks," Nicolas Sarkozy told Le Parisien.

Another 10 are in Iraq, Pakistan, Syria and Afghanistan, he said.»


The only thing that accounts for the small number is that these are the ones bored enough to leave their state benefits behind. Which leaves many semi-lethargic sympathizers hanging out in ratty suburban apartments outside Paris thinking of ways to call themselves victims.