Cut on the Bias 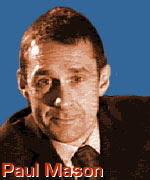 This from Andrew Kinsman, a commenter on Biased-BBC, we find a BBC personality revealing the state of the journalistic bias that they refuse to recognize or address:

Just a short personal message of solidarity - I will raise your dispute in our Chapel when we meet next. I am constantly struck by the small minded penny pinching of media owners who spare no expense for their own largesse.

Your fight is part of a resurgence of grassroots trade unionism that is telling the managers "we're back" in every sector of the economy.

First of all, what's this "we" shit coming from a business correpondant?!? Does he pretend to speak for the BBC? IF he’s speaking for himself, does he thing burying the words “personal capacity” at the end inoculate him from criticism?