Hiroshima 14: "I regard Hiroshima revisionism as the greatest hoax in American history" 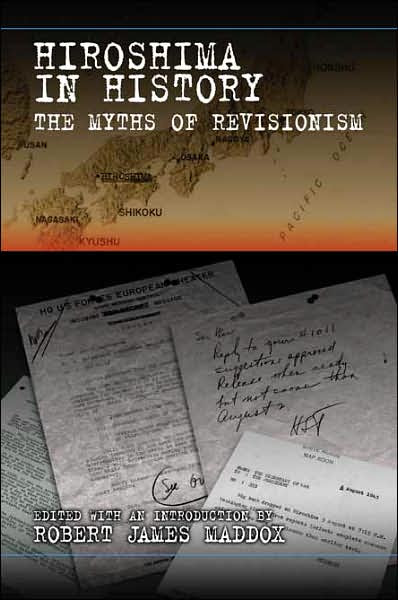 Robert Maddox: the veteran historian ("I regard Hiroshima [revisionism] as the greatest hoax in American history") is interviewed by Victor Fic on every Atomic bombing subject imaginable (read more)…


A sampling of revisionist fictions treated in Hiroshima is as follows:

1.  That intercepted messages between Tokyo and Japanese diplomats abroad during the summer of 1945 revealed Japan’s willingness to surrender.

None of these messages even hinted that Japan was prepared to surrender under any circumstances. Some members of what Robert P. Newman has referred to as the “civilian elite” were trying to enlist the Soviet Union in brokering a peace that would have permitted Japan to escape with its prewar empire and imperial system intact.  Several enterprising revisionists, including Kai Bird and Martin J. Sherwin in their recent Pulitzer Prize-winning American Prometheus:  The Triumph and Tragedy of J. Robert Oppenheimer (2006), have misrepresented these messages by the simple device of pretending that the word “peace” meant the same thing as “surrender.” They neglect to inform their readers that as late as 17 July 1945 the Japanese foreign minister stated that “we are not asking [for] the Russians’ mediation in anything like unconditional surrender. . . .”

Sadao Asada’s essay in Hiroshima, based largely on Japanese sources, shows how difficult it was for the Japanese “peace party” to prevail over the hardliners in the government even after both bombs had been dropped and the Soviet Union had entered the war.  That they could have done so before these catastrophic events is impossible to credit.

Edward J. Drea points out that regardless of what the diplomats were trying to accomplish, intercepted military traffic (ULTRA) revealed that the Japanese military was “struggling around the clock to turn Kyushu’s beaches [site of the first planned invasion] into massive killing grounds.”  And the generals controlled the situation, not the civilians.

• Hiroshima 1: Unlike the ends of the majority of conflicts, World War II in the Pacific grew increasingly bloody as U.S. forces approached the Japanese homeland (Erik Svane)
Posted by Erik at 21:00