In Michael Kimmelman's article about the status of the French language and about French culture and identity, the New York Times insouciantly (and gratuitously) throws in a comparison of America's tea parties to France's far-right party, the National Front, a faction whose members are routinely described as populist, reactionary, racist, and, above all, (very) dangerous. (That seems to be becoming the narrative, in France and elsewhere, as American expatriate Jake Lamar did something similar in Le Monde Magazine last weekend, "explaining" to French readers that Fox News would be like a popular French news channel, albeit run by le Front National.) 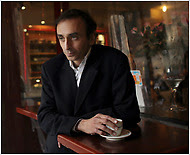 may sound perfectly obvious to Americans, but it’s not necessarily so to France’s growing tea party contingent. The populist National Front party won some 20 percent of the vote in the south last month (less nationwide), despite Mr. Sarkozy’s monthslong campaign to seduce right-wing voters by stressing the preservation of French national identity. Part of that campaign has been affirming a policy of cultural exceptionalism.

The Front National is not only wrongly called the equivalent of a "tea party contingent" (for some reason, in case it might interest you, the International Herald Tribune's print version puts the expression "tea party" in quotes, thus: 'France’s growing "tea party" contingent'), the Michael Kimmelman article also wrongly seems to suggest, deliberately or otherwise, that the FN is a recent phenomenon (based you would think in effect on America's tea party), when Jean-Marie Le Pen founded the party almost 40 years ago…

Update: The New York Times does it again…
Posted by Erik at 14:20