Dieudonné is a Bearded Clam

The former used car salesman, former mediocre comedian, and all-around lover of jack-booted thugs is in Iran to partake in the celebration of their revolution that installed their theocracy.

Maybe he’s hoping to see a homophobic judicial lynching or something.

Dieudonné is in Tehran again. This time, it’s not to seek the release of Clotilde Reiss, but to talk about movies along with some French friends who accompanied him. It means letting go in public on the theme of Jewish villains without risking a fine. It’s an ode to indifference in all its forms.

For years during the anniversary of the Islamic revolution, the mullahs' regime organize days of Fajr (“dawn” in Arabic) that the Iranians call the days of ZAJR or torture. Thy hold a film festival in this 10 day period. The Fajr Film Festival has honored the greatest filmmakers of the regime, and those foreigners pretending to be dissident artists. 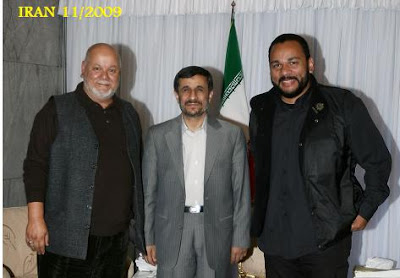 He called Sarkozy a dictator, but can’t see the one standing next to him.
Posted by Joe at 11:06