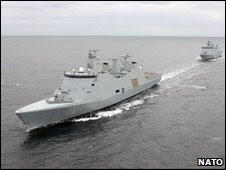 …it was the first time a warship had intervened after pirates boarded a vessel.

Troops in inflatable dinghies moved in after a distress signal from the Antigua and Barbuda-flagged Ariella.

Update: "Denmark over the past few years has been increasing an emphasis on its special forces," writes Sharon Weinberger, "which consist of the Jægerkorpset, an Army unit similar to British commandos, and the Frømandskorpset, the rough equivalent of U.S. Navy SEALs. Not only have they grown their ranks; they are seeking action as well."

"Events happen rapidly in our field, and if we are to measure up to the best special forces out there, it doesn't do any good if we only train," the special forces corps chief, Lt. Col. Henrik Friis, said in 2005, according to the trade publication Defense News. "We need to get out and complete some missions."