Love is a Warm Molotov Cocktail

Paris, the city of lurrrrve: « Beating and Scaring people “is funny” »

Elsewhere, and not to be missed is the high school chick kicking some dude in the nuts in a “student protest” over heaven only knows what, really. 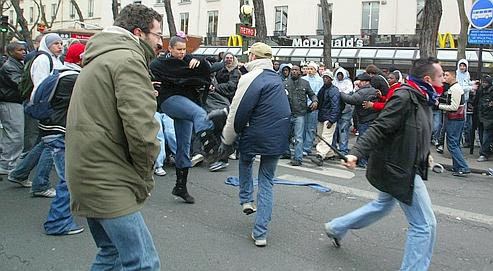 Either way this stuff is taking place at “festivals”.

The attacks are increasing at festive events in the capital.

Long spared the violence that tarnished at regular intervals of other gatherings, many festive events in Paris have recently been targeted by gangs "formed" clearly from the Seine-Saint-Denis and Val-de-Marne.

This week, the incidents that occurred last September 19 in conjunction with the Technoparade came up in a "debriefing" held in the Police Prefecture. At that time, a strengthening of security measures surrounding these events was emphasized. "The presence now of recurrent violent gangs on the Gay and Lesbian Pride Walk, the Celebrations by College Graduates or the Technoparade are disturbing to us," said Jean-François Demarais, Police Director for Public Order and Traffic.A vote for communitarian spirit if there ever was one. So much for that ‘siesta after the fiesta’.
Posted by Joe at 06:30