The resentments constitute common fare not only among Western Europe's cultural and media elites, but also throughout society itself

What irritates me the most about the constant harping of the German media is that they seem less concerned with what is wrong in their own backyard than with what is wrong with the United States. School shooting in Colorado? Big news. School shooting in Erfurt, Germany? Not really that important. Race riots in Los Angeles? Extremely newsworthy. Race riots in France? Not so much. It seems to spring from malice towards the United States, as if every news item is supposed to be a stick in our eye. It’s almost if they know who their enemy is (the US), and then intend to follow their enemy around and make sure that every slip-up (real or imagined) is shown to the world in the worst light possible. Then they wonder why we think that they’re anti-American.

Benjamin Duffy explains why the Americans have replaced Germans as the new Nazis. Meanwhile, Andrei S. Markovits points out that anti-Americanism is essential for Europe's identity. The resentments 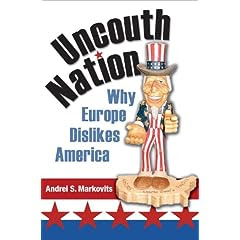 are present in polite company and acceptable in the discourse of the political classes. They constitute common fare not only among Western Europe's cultural and media elites, but also throughout society itself, from London to Athens and from Stockholm to Rome, even if European politicians visiting Washington or European professors at international conferences about anti-Americanism and anti-Semitism are adamant about denying or sugarcoating that reality.