How About We Go Out and Raise us up Some More of that “Awareness,” there Skeeter?

Someone will fight over it, and as always someone will finally resolve the situation with a compromise and do the wrong thing.

Thereafter the standard sign will be replaced by a “series” of signs featuring women and men of various ages, and some livestock (NL, SE, DE only). Owing to the fact that someone will realized after some unfortunate people are turned into crispy critters, that the whole thing defeated the purpose of standardized signage that everyone can deal with, things will change. You won’t have to think to yourself: “is this the means of egress for men, women, or ‘others’?” immediately prior to asphyxiation.

No – it a centrally planned society like this, the outcome will be for the betterment of man beingdom. The sign will feature a woman AND a man.

The colorblind, if they see our little green polyandrous friend at all, will mistake it the toilet room for the fire escape.

Let’s not be too picky, now. Those lives lost are sure to matter less than the great leap forward in becoming a newly inventive form of normative human.

"Because it clashes with fixed visual habits, the campaign compels (people) to think, look and act differently," Sonja Wehsely, city councillor in charge of women's affairs, said in the statement.

Thus, signs using male characters will have their female equivalent, while the opposite will also be true.

Female exit signs and pictograms in bathrooms featuring a man, rather than a woman, changing a baby, will be introduced at City Hall to start with, the statement said.

Seats reserved for the elderly and pregnant women on Vienna's buses and trams will soon also picture a man carrying a child on his lap.

A roadworks sign picturing a woman in a skirt digging into a pile of dirt and used on a campaign poster will not see the light of day however because of traffic regulations.

Just remember that the continent is named for the mythical Europa who cannot be separated from the mythology of the sacred bull. The story goes that she was eventually raped to death. 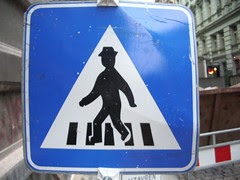 Now imagine for a moment you weren’t such a brave and bold “normativizer,” and don’t quite buy the solidarity, sameness, and uniformity of the sexes routine. Wouldn’t you be less empathetic to the great and grand ideals of Marxists, and prefer to see this crossing sign from the Marxist normative paradise which NEVER featured women, and cursed all me with early 60’s style narrow brimmed fedoras? The little guy's grooming?: unclear.

I think you would, but would never admit it. That’s some kind of hang up you’ve got there man.
Posted by Joe at 03:10