How to talk to a European leftist, if you must

When polluting the minds of the locals, make sure to use the occasional religiously based allegory. It works especially well while discussing minor points of their stated pacifism with a leftist anarchist throwing a chair through a plate glass window.
Ex.: “wouldn’t it be better to teach a man to fish?,” and that sort of thing. Also ask them why there is no explosion of enthusiasm when there is a broadly publicized murder in the US, a nation of 300 million people, and no call to “understand the vast majority of peaceful Americans” when so many “social commentators” are prepared to claw each others’ eyes out to be the first to mention “the vast majority of peaceful muslims” when, say, a huge ugly mob marches after coordinated Friday sermons in Pakistani mosques or a nun gets shot?

Incidents like this allow the MSM to ram home another of the chattering classes favourite points, namely the evil of guns. Hell, the only way they could have worked themselves into more of a self-righteous snit would be if the killer had been driving round the school in a 4x4. The funny thing is that the same MSM which claims that the gun is at the very centre of US culture, act as though the Koran and the Hadiths are just a set of vague suggestions, completely unrelated to any current events, in fact hardly worth bothering with at all. 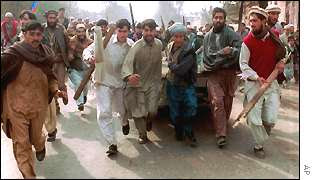 Sassy youthes singing: “give peace a chance” and
“I just wanted to say I love you in a song.”
Posted by Joe at 10:24