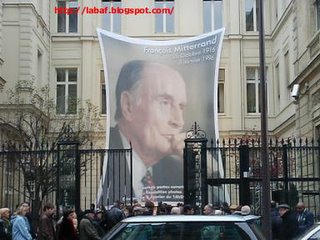 To honor the tenth anniversary of the death of President François Mitterrand, France has been holding a week-long commmoration, notably at the national headquarters of the Socialist Party in Paris.

A visit to the Rue de Solférino headquarters confirmed that several things seemed to have been left out of the display of 180 photos, the news reels, and the recorded speeches, notably the unpalatable fact that before recasting himself in the heroic figure of a resistance fighter, "Tonton" (as Chirac's predecessor was affectionately called) had worked in the Vichy government during the Second World War, during which time he received the infamous Francisque award from the hands of Maréchal Pétain himself. 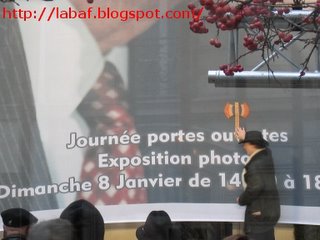 So, France's equivalents of the Protest Warriors decided to refresh memories a bit, running forward to tape an oversized Francisque on the multi-story portrait of Mitterrand, before being hauled away by the security guys, followed by the arrival of the police, lights flashing and sirens wailing. La BAF has details in French, plus a video (to the tune of the Vichy-era song "Maréchal, nous voilà"). 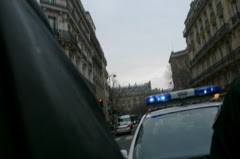 E-Nough has the story in English. (Spanish readers can read a Spanish-language version.)
Posted by Erik at 08:20